’Tis a Wonderful Time to Be Alive

Life in a Newfoundland Outport 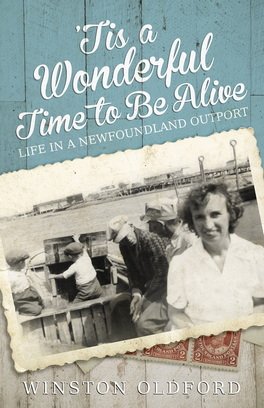 ’Tis a Wonderful Time to Be Alive is Winston Oldford’s personal account of growing up in Burnside, Bonavista Bay, in the 1940s and 1950s. The tiny community underwent a baptism by fire—literally—in the early twentieth century. Following a devastating forest fire in the area in 1912, the settlements of Squid Tickle and Holletts Cove became known, collectively, as Burnside. Today, with a population close to 200, it is one of seven communities on the Eastport Peninsula. This book takes a look at the history of Burnside, as well as the day-to-day lives of those who have lived in the community over the last two centuries. Winston Oldford takes the reader on a guided tour of his hometown and the cultural foundations upon which Burnside was built.

While of interest to those who grew up in the community, Oldford’s book will also be a great read for people who spent their formative years in other rural areas of the province. Those who would like to learn more about that way of life will also find ‘’Tis a Wonderful Time to Be Alive’ a charming read.-- The Beacon --

One could build a replica of an outport using the information in Oldford’s book. It is a reference book of the finest kind, as well as an interesting narrative.-- The Guardian --

This is a book for anyone with an interest in Newfoundland culture. Oldford writes as he speaks, with all the casual, folksy charm of the seasoned storyteller.-- The Telegram --