The Church Lads Brigade in Newfoundland 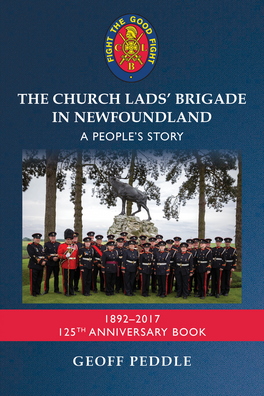 A History of the Church Lads’ Brigade (CLB)

The year 2017 marks 125 years of service in Newfoundland for the Church Lads’ Brigade. Today, it is the oldest and largest Anglican youth organization in Canada. The CLB is also one of the most recognizable civic organizations in the province of Newfoundland and Labrador, known nationally for its regimental band. Since 1892 there have been more than 20,000 members in Newfoundland, with about 12,000 still living. Approximately 600 members in eighteen active companies are still listed on strength.

The Right Reverend Geoff Peddle, Ph.D., is the regimental chaplain to the CLB. Here, he recounts the history of this incredible organization while telling the story of its continuing work today.

One of the earliest references to the Church Lads’ Brigade in Newfoundland is found in a small caption in the Diocesan Magazine of November 1892 in the section called “Church News.” Although the writer seems to have mixed up the Church Lads’ Brigade with the other “Brigades,” it reads as follows: One very interesting phase of Christian work amongst the young in London takes the name of the Church Lads’ Brigade. As members of the Brigade the boys are specially taught two virtues—self-restraint and obedience. Once a year as many as can be sent go into camp for a holiday in the country, the number in 1889 having been 600; in 1890, 1,037; in 1891, 1,200. This year there were nearly 2,000 so happily provided for. This movement supplies a real want in Church organization, and deserves a warm welcome and practical support. Even before the Diocesan Magazine carried news of the Church Lads’ Brigade in November of 1892, a young eighteen-year-old named Harold Rowe Blackler of 72 George Street in St. John’s had read about the CLB in Britain in the Church of England Temperance Monthly, the magazine of the Church of England Temperance Society. Harold Blackler spoke with the rector of the Cathedral of St. John the Baptist, the Rev. J. S. Thompson, about the possibility of bringing the organization to Newfoundland, but the cleric was not convinced, believing the Church of England Temperance Society and the Band of Hope met the needs of young persons in the church quite adequately and there was no need for the addition of the CLB to Newfoundland. Blackler did not rest with his rector’s refusal but took his request directly to the bishop of the Diocese of Newfoundland, the Rt. Rev. Llewellyn Jones, who gave him an entirely different hearing. Not only did the bishop tell the determined teenager to begin gathering boys for the Brigade, but that he would also have one of the diocesan clergy write to Gee about forming a company in Newfoundland. This meeting would also mark the beginning of a relationship continuing to the present day whereby the bishop of the diocese would be the head of the CLB in Newfoundland. On November 18, 1892, the first Church Lads’ Brigade company was officially formed in St. John’s, although it had been parading for some time before then, and it was formally enrolled on December 30. Ironically, the bishop gave the role of overseeing this new company to the Cathedral rector, the Rev. J. S. Thompson, who had previously rejected the young Blackler’s request, making Thompson the first company chaplain in Newfoundland. Harold Blackler was the first recruit with Regimental Number 1, and he later became the first CLB sergeant outside Great Britain. The new Company, “A Company,” formed at the Cathedral Parish of St. John the Baptist with a uniform of a navy blue pillbox with a yellow band (twenty-five cents), a navy blue jersey (fifty cents), a white haversack (five cents), and a belt with a buckle (twenty-five cents). Additionally, there were navy blue britches with a yellow stripe and puttees, but these were often homemade. It was expected of every recruit that the cost of the uniform would be paid off in fifty weeks. The first meeting of the CLB in Newfoundland took place at Harold Blackler’s home, but the more than twenty new members made it necessary to move to the Mission Room of St. Michael’s Hall on the corner of Gilbert and Springdale Streets, at that time a mission of the Cathedral but later to become the Parish of St. Michael and All Angels. Some of the equipment needed for training was kept at the Cathedral and was lost in the Great Fire of July 8, 1892. Donations to replace it came from as far away as the CLB in Britain, which sent kits for fifty lads. The Brigade moved several times in the early years: in 1893 to a warehouse on Water Street owned by Johnstone and West, then in 1894 to Harvey’s Butterine Factory on what is today Forest Road, then in 1895 to the Pro-Cathedral Building while the Cathedral was being restored, and finally in 1899 to its first armoury in the Old Victoria Rink on King’s Road, largely through the efforts of Sir Joseph Outerbridge, the first colonel and commanding officer. Beginning with little more than passion and enthusiasm and a place to meet, the fledgling CLB depended upon donations to provide for their programs. Indian clubs, parallel bars, iron rings, rope, broomsticks for rifles, dumbbells, mattresses for the floor, and boxing gloves were all donated by supporters. From the beginning, athletics played a major role in the Church Lads’ Brigade, with gymnastics, boxing, football, and sword fighting (with a wooden blade) all proving popular. Indeed, the photographs and plaques surviving from the early years of the organization reveal a group consumed with athletic achievements and physical ability. The CLB nurtured a great ideal of physical fitness that would not have been out of place in a fully-fledged military organization and reflected a model similar to that found on those famous “playing fields of Eton,” where such standards were cherished. Over the years there were a great many coveted trophies and awards given for sporting competitions. The first commanding officer was Captain W. S. Melville, who worked initially with the following officers: C. Wearing Hayward, Alan C. Goodridge, and Joseph Shea. Gymnastic instructors were Arthur Frank Donelly and Harry Donelly. NCOs (L/Cpls) were Harold Blackler, Edward Reid, Henry Lewis, and George R. Williams.