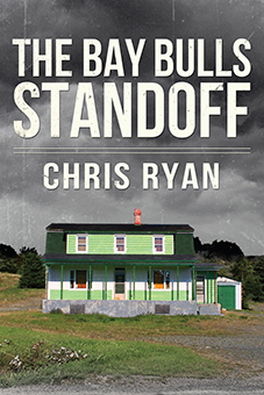 The Mounties don’t always get their man. There is a folk legend living in Bay Bulls, on the Southern Shore of Newfoundland, by the name of Leo Crockwell. He ranks up there with legends like D. B. Cooper and Albert Johnson, the Mad Trapper of Rat River. This is the story of how Leo Crockwell took on one of the most revered police forces in the world, the Royal Canadian Mounted Police, and walked away unscathed. On December 4, 2010, Leo Crockwell, fifty-five, an electrical technician and lifetime resident of Bay Bulls, barricaded himself in his mother’s house in Bay Bulls after an altercation with his sister involving a firearm. Chris “Dutch” Ryan, a friend and neighbour of Leo’s, watched as for the next eight days the RCMP utilized every tool at its disposal to extract Leo from the house and bring the standoff to a peaceful end. But no one expected it to end like it did. The Bay Bulls Standoff is a dialogue-driven account of the eight days in Bay Bulls that made national headlines in 2010. Chris Ryan’s memoir takes the reader on a ride-along tour and, for the first time, shares the frustration and worry the residents of the town felt for the safety of their friend Leo Crockwell.

There is a folk legend living in Bay Bulls, on the Southern Shore of Newfoundland, by the name of Leo Crockwell. He ranks up there with legends like D. B. Cooper and Albert Johnson, the Mad Trapper of Rat River. This is the story of how Leo Crockwell took on one of the most revered police forces in the world, the Royal Canadian Mounted Police, and walked away unscathed. On December 4, 2010, Leo Crockwell, fifty-five, an electrical technician and lifetime resident of Bay Bulls, barricaded himself in his mother’s house in Bay Bulls after an altercation with his sister involving a firearm. He held off members of the RCMP for a week. On the eighth day of the standoff, police realized they had been guarding an empty house overnight: Leo Crockwell had escaped. For eight days my older brother Joe and I and a number of other residents camped out in the local gravel pit in our hometown. We were there out of concern for our friend Leo Crockwell. The gravel pit is on the south side of Bay Bulls harbour. The Crockwell house is on the north side of the harbour, about half a kilometre from the pit. We picked the gravel pit for our stakeout since it is somewhat elevated in relation to the house, roughly twenty-nine metres above it. Also, at night it is very dark and the area is fairly uninhabited. That first day, we decided we were in for the long haul. If the standoff went into the night, it would require expensive optics to collect low light and brighten the objects being viewed. I’m recognized as one of the top birdwatchers in the province, being one of fewer than twenty people to document, in their birding careers, nearly 300 or more species of birds. To be a serious birder, you need optics. The optical equipment that I used during this standoff is the best that can be bought. My binoculars are Bushnell Elites, 10 x 42mm. Ten is the magnification number, which means the object being viewed appears ten times closer than with the naked eye. Forty-two is the diameter in millimetres of the objective lens, the glass at the front end of the binoculars. My spotting scope is a Swarovski AT80 HD 30-60x zoom. I shared my equipment with the other watchers: with these optics, people were able to look for hours without tiring or becoming bleary-eyed. From our vantage point we could see everything that went on, practically every minute of every hour. We could pinpoint each and every sharpshooter. We knew where each of them lay: under a tree, behind a house, or around the corner of a garage. We even came to know which police vehicles would be used during certain routines every day. We could predict which ones would be positioned to stake out the northwest corner of the Crockwell property and which ones would go to Paddy’s Convenience for sub sandwiches and coffee and to Vincie Crane’s North Atlantic gas bar for fish and chips, and for whatever else was needed to feed the officers on duty, day and night. We would watch them drive from point to point delivering food and coffee to their comrades. All weapons were laid down when these deliveries were made. Who was watching the house during these breaks? Absolutely no one. Sharpshooters would put down their weapons and walk away to the delivery vehicle, sometimes several hundred feet from their post. At the gravel pit, we also had food delivered to us on occasion. We didn’t want to leave our stakeout location and miss any of the action for the want of food, either. My stepdaughter Stacie Wakeham brought food to us a number of times from the house in Witless Bay where I live with her mother, Tina, and her younger sister, Hollie. Some of our family members, friends, and other residents of Bay Bulls made fun about our spending so much time in the gravel pit, but we were there out of concern for Leo. We wanted front-row seats to the action. We wanted to watch the police in case there were screw-ups: we would be witnesses for Leo. We thought we might have to go to bat for Leo with the media. We observed many screw-ups during the standoff, which I sometimes call the Eight-Day Fiasco. We knew Leo, and we were certain he would not give up easily. He was a very determined individual. This was repeated to the media by members of the Bay Bulls public many times during those eight days. They were told that Leo was not an average person, but an individual with a very high IQ. So, when Leo made his Houdini-like escape and was located twenty-three kilometres away the day after his seven days of entrapment, it verified what we’d been saying all week: if you had to choose ten people that were capable of eluding the RCMP, Leo would be at the top of the list.

[Ryan’s] book, without being overtly funny, is both deeply humorous and raises serious questions.-- The Guardian --

What makes it unique is its stylistic approach. Rather than telling the story in a narrative form, Ryan takes a documentary-like stance by recounting the events of each day through the dialogue of the people he encountered during the standoff.-- Atlantic Books Today --

[Chris Ryan] has told the tale from a sympathetic standpoint; has put the tale on library shelves, so to speak. That, in itself, is a good thing.-- The Packet --

Entrenched in deep community connection, this chronicle of events gives us a bird’s eye view of the reaction from the town and their perspective on the incident- whether it be dedication, misunderstanding or sympathy. Either way, it was on everyone’s minds and it is worth hearing the story.-- Tint of Ink --