The Smugglers from St. Pierre and Miquelon and the Burin Peninsula from Prohibition to Present Day 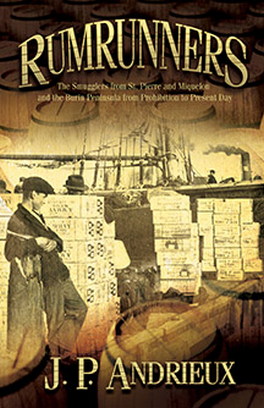 Rumrunners is a history of the smuggling trade between the French Island colonies of St. Pierre and Miquelon and the United States, the Bahamas, and Newfoundland. The distribution of contraband alcohol has always been an element of the culture of Newfoundland and Labrador. However, with the advent of the American Prohibition era (1919–1933), the French Islands’ illegal practice took on worldwide proportions. This book details the rise and fall of the bootlegging industry in Atlantic waters, the efforts made by the Royal Canadian Mounted Police to curb these criminal activities, and the evolution of laws from the Prohibition era to present day that have brought the trade to a virtual standstill.

Rumrunners is full of relevant pictures, bringing the stories to life, creating a realistic understanding of what actually happened.-- Current Magazine --

[Rumrunners] takes what is largely Newfoundland kitchen lore about beating the revenuers (pardon the American slang) and turns it into a readable account of liquor smuggling off the French islands of Saint Pierre and Miquelon and on the Burin Peninsula of Newfoundland.-- The Northern Mariner --

'Rumrunners' is a book that lives up to that promise — it outlines the hoaxes and subterfuges used to outwit law enforcement on both land and sea, and it is full of wonderful photographs of everything from a house built of Cutty Sark boxes to Al Capone's hat on display at the Hotel Robert.-- The Telegram --