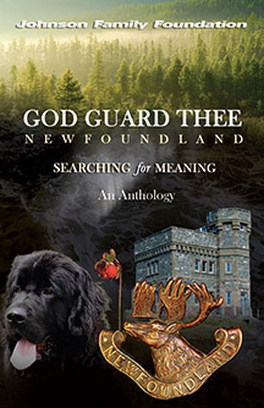 God Guard Thee Newfoundland is an anthology of personal writings and historical research from both historians and journalists. Newfoundland and Labrador’s five-hundred-year-old fishery developed problems initially resulting from England’s refusal or inability to implement and enforce well-planned fishery regulations. And the governments, justice systems, and land ownership rules that were imposed on the people of this province for hundreds of years were not even close to being logical or adequate. How will Newfoundlanders and Labradorians now get a fair share in developing their resources? What have they learned from their recent and not-so-recent experiences? God Guard Thee Newfoundland examines these and other pertinent questions facing the province today.

Excerpted from Frank J. Kennedy’s contribution-chapter “Wartime in Newfoundland” The Sinking of the Caribou. October, 1941. The log of the U-69, made public after the war, read, “Oct. 14, 0300 hours NDT Sighted freighter followed by warship. We are preparing to attack.” In the bright moonlight the Caribou was an easy target and at 3:30 a.m. a torpedo hit the starboard side with devastating results. Many passengers died instantly. The ship’s boilers blew up, killing everyone in the engine room. The lights went out and there was panic below deck as people tried to find their way up in the darkness. Many could not remember their lifeboat station number and those who went to the starboard side found their lifeboats blown to bits by the torpedo. On the port side two lifeboats that were already hanging out over the side were lowered into the water by the crew. As passengers jumped in, the boats began filling with water. There were holes in the bottom to drain rainwater and someone had neglected to put back the plugs. In the first boat the plugs were found and replaced and that boat got away safely but the second one began sinking and overturned, throwing the unfortunate occupants into the cold water. At the stern of the Caribou the remaining two lifeboats were still on deck attached to the davits, but before they could be swung out over the side, they were filled with people. There was no way the crew could handle the boats now and they implored the passengers to get out so they could pull the boats from the deck and lower them into the water. The frightened people refused to move. The ship was sinking fast and when it went under it pulled the two lifeboats with it as they were still attached to the davits. Purser Tom Fleming had helped many passengers aboard the first lifeboats in the five minutes the Caribou remained afloat and was trying to free a life raft when he felt the deck go under. Realizing people are often sucked to their deaths when a ship sinks, he took a deep breath and went down with the ship. But not far. Tom was a strong swimmer and was determined not to die now. With lungs almost bursting he came to the surface, helped in no small way by the lifejacket he was wearing. All around people were clinging to life rafts, pieces of wreckage, and the one lifeboat that managed to stay afloat. Some were crying, others were dying. Still others were shouting the names of loved ones, hoping to hear the reply “I’m here!” Some did. Fleming was the only ship’s officer to survive. All the others including Capt. Ben Tavnor and his two sons, Harold and Stanley, were lost.

God Guard Thee Newfoundland: Searching for Meaning is a unique, remarkable and valuable work.-- The Telegram --

A valuable resource, as well as an interesting view on history.-- Current --