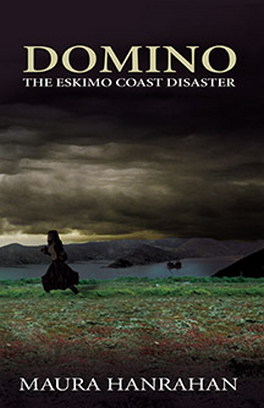 Domino tells a compelling tale that was almost lost: the true story of a deadly hurricane that devastated Labrador's Eskimo Coast in the fall of 1885. Fishermen and their families on their way home from a hard summer's work were caught in the fierce winds and waves. Sixty-six ships were wrecked and over seventy people died, many of them women and children. And the after-effects of the completely unexpected storm were more far-reaching than anyone could imagine.

Maura Hanrahan's account blends fictional characters and real-life figures (including a youthful Bob Bartlett of later Arctic sailing fame) who paint a vivid picture of their involvement in a fishery beset with many dangers at the best of times.-- Canadian Book Review Annual --

Hanrahan's presentation of attenuated lives on a bleak and stone-grey shoreline are incredibly evocative and form the clothesline from which flap well-ordered and well-researched historic details.-- The Northern Mariner --

Domino: The Eskimo Coast Disaster is a gripping tale about one of the most horrendous tragedies in Newfoundland and Labrador history.-- The Navigator --

Maura Hanrahan tells the story well . . .-- Messing Around in Boats --