The Royal Newfoundland Regiment in the Great War

A Guide to the Battlefields and Memorials of France, Belgium, and Gallipoli 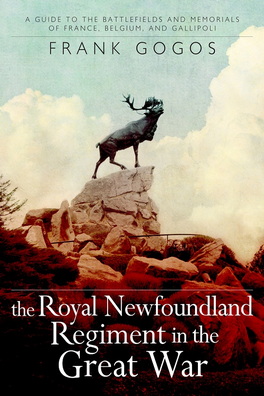 With more than 400 photographs and 40 maps, this history of the Royal Newfoundland Regiment is a tribute to those who served and a guide for those who wish to retrace the soldiers' steps. It is the essential travel companion to the battlefields and memorials of the Newfoundland Contingent in the Great War. In 1914, the Dominion of Newfoundland stepped forward to stand to arms in aid of the British Empire, mobilizing a generation of young volunteers to fight the Central Powers. Unlike her Imperial cousins, Canada, Australia, New Zealand, and South Africa, this rugged North Atlantic country did not have a standing army. From this inauspicious beginning, the 1st Newfoundland Regiment evolved into one of the toughest and most respected fighting units in the First World War, the only Regiment serving in the armies of the British Empire to be awarded the title “Royal” during these hostilities. But the fighting cost them dearly. Suffering great losses, the Royal Newfoundland Regiment left many of its soldiers behind on the battlefields of France, Belgium, and Gallipoli. After the war, Padre Thomas Nangle of the Royal Newfoundland Regiment pioneered the commemoration of these soldiers through proper burials and the creation of magnificent memorials to the fallen. More than a hundred years have passed since the beginning of the Great War, and new generations are visiting these memorials to bear witness to the heroism and sacrifice of their forebears. This book is a must-have for anyone making the pilgrimage to those battlefields.

On the night of September 19 and the early morning of September 20, 1915, after several weeks of adjusting to the Mediterranean climate in Egypt, the Newfoundland Regiment disembarked from lighters (early landing craft) in a small northern harbour in Suvla Bay on the Gallipoli Peninsula. Kangaroo Beach, as it was known, is the first land where the Regiment touched ground and took casualties from Turkish artillery who observed their arrival. For Newfoundland, this marked the first time that the country had become involved in an international military affair as a self-governing Dominion of the British Empire. All this was done with an emerging national pride and an equally patriotic zeal to support Britain. The Newfoundland Regiment, a “ragtag volunteer bunch of colonials” in the eyes of the seasoned British veterans (but in fact a Regiment well-trained with something to prove and ready for a fight), appeared on the doorsteps of the “incomparable” 29th Division made up of 11 professional battalions brought together from around the Empire. The 29th Division had fought heroically at Cape Helles from the first day of the campaign on April 25, 1915. The 88th Brigade of the 29th Division, which the Newfoundlanders were to join, had also been pressed into service for the landing at Suvla Bay in early August. By the time the Newfoundland Regiment had arrived on the scene, the entire Gallipoli Campaign had ground down to a murderous stalemate. Neither side had an advantage over the other. Every advance usually meant disaster for the attackers. Almost from the beginning the Newfoundland Regiment’s biggest obstacle was sickness, brought on by the heat and flies that flourished among the rotting flesh of hundreds of corpses left in no man’s land from previous battles. The flies were so thick, by the time a soldier spread jam on his biscuit and got it to his mouth, the entire biscuit was covered in flies. These flies carried a host of germs that promulgated into a variety of nasty intestinal diseases. In addition, the primitive sanitation and the scarce availability of clean drinking water only added to their misery. Many men of all nations succumbed to dysentery, diarrhea, and enteric fever. As a result, hundreds of Newfoundland soldiers, roughly half of all who served, would be invalided out of Gallipoli. Some would die from sickness while many others carried Gallipoli torments for decades, if indeed they managed to survive that long. It was a weakened Battalion that won its first decorations for valour in the field. On November 4, 1915, a small action was planned and executed by eight men of “C” Company to take a small knoll in no man’s land. This knoll protected Turkish snipers who harassed the British trenches almost every night. During the day a section led by Lt. James Donnelly was able to approach the hill and occupy it before the Turks, who were expected later in the evening. Three Turkish snipers appeared, carelessly approaching the hill in the waning light with their guns casually slung over their shoulders. The sergeant with the little group issued a challenge, which resulted in excited uproar from the approaching Turks. Having clearly determined that they were Turkish, Donnelly ordered the men to fire. Two Turks were killed and the sergeant slightly wounded. Donnelly sent the wounded soldier back with a request for reinforcements and another eight men were sent out to bolster Donnelly’s defences. En route to the knoll these men, led by Lt. Hector Ross, ran into a patrol of Turkish infantrymen attempting to encircle Donnelly’s recently captured post, and another close-quarter firefight with the Newfoundlanders took place. The Turks took heavy casualties as two of Donnelly’s men barraged the enemy with rapid-fire and the Turks were driven off. Four of the eight Newfoundlanders were wounded and Private James Ellsworth was killed. But the hill remained in Allied hands. The knoll became known as Caribou Hill in deference to the gallant lads from Newfoundland. Caribou Hill was reinforced and incorporated into the British front line with at least two machine-gun placements, thereby ending the sniper threat to a portion of the Newfoundlanders’ front lines. Back home many rejoiced over the heroic deeds and beamed with patriotism over the issuing of gallantry awards for this action.

If you want to visit the sites of significance to the Royal Newfoundland Regiment, this book will tell you where to go, and show you what you’re looking for.-- Northeast Avalon Times --

A deluxe volume which no one interested in the Great War should be without.-- The Guardian --

Flanker’s layout is a triumph of clarity, such that although I may never see these battlefields, I feel as though I have. This book comes highly recommended for travellers of both the literal and armchair variety.-- The Telegram --

For those planning a pilgrimage to the battlefields, this is a must-read. If you can’t make the trek overseas, it’s the next best way to follow the trail of the caribou.-- Canada’s History --

With over 400 photos and 40 maps, this is a visual detailed documentary of the Dominion of Newfoundland and its role in battle.-- Tint of Ink --