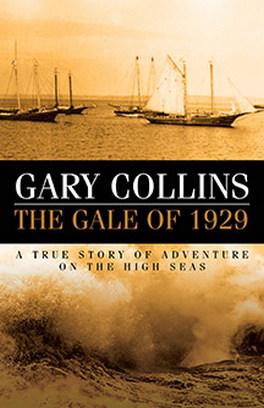 On the night of November 29, 1929, eleven schooners set sail for home from the comfort and safety of St. John’s harbour. They all headed north: directly into the teeth of a deadly hurricane. Here for the first time are the stories of the eleven schooners that were caught in the gale of 1929. Newfoundland’s favourite storyteller, Gary Collins, takes us aboard each one in turn to witness the terrifying ferocity of a storm at sea through the eyes of the schoonermen who battled it. These interconnected tales of high-seas adventure illustrate the bravery and ingenuity of a lost breed of sailors, whose quick thinking often meant life or death for the whole crew. Turn the page and set sail for an exciting journey that will leave you breathless!

Not unlike the seasoned schoonermen battling the famous gale, Collins manages to navigate his way around each story as seen through the eyes of the characters involved. It may be that I, myself, had an affinity for the characters, having been through a similar situation on a 115-foot schooner. But, it felt to me like Collins took me up and down each wave, and let me inside each heroic task of survival.-- Arts East --

The author’s technique somehow imparts an amazing amount of colour and detail to scenes and events. With nothing more that words, the author succeeds in entertaining and instructing, while telling the story of an event little known in the rest of Canada.-- The Northern Mariner --

Gary Collins] has definitely succeeded in producing 11 distinct and exciting stories about the battered schooners, helplessly driven by gale-force winds through storm-tossed waters.-- The Chronicle Herald --