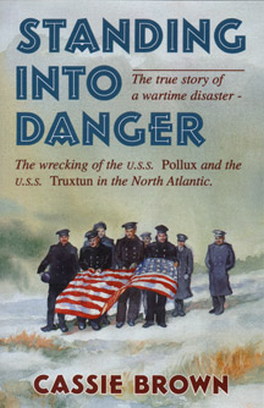 In the snowy predawn of February 18, 1942, a convoy of three American ships zigzagged up the North Atlantic toward Newfoundland, heading for one of the worst disasters in naval history. The ships were under radio silence to protect their position from the threat of German U-boats. A storm was raging, visibility was zero, and the currents had turned wildly unpredictable. With only unreliable soundings to guide them across the jagged ocean floor, all three vessels ran aground on the sheer rock coast of Newfoundland. Attempts to carry lifelines ashore were thwarted by heavy surf, cold, oil slicks, and floating wreckage. A few sailors, however, overcame the odds and managed to reach the coast where the communities of Lawn and St. Lawrence effected a superhuman rescue operation. Two hundred and three American sailors died as the Wilkes, the Pollux, and the Truxtun were battered against the icy shore by the treacherous North Atlantic. And those who survived would return home to receive not a hero's welcome but the harsh interrogation of their naval superiors.

USS Pollux February 18, 1942–0417 hours As the Pollux thrashed about, plates clanging against the rocks, her crew were hurled to the deck. Lieutenant Grindley, regaining his feet, rushed into the chartroom, ran around the table, and glanced at the chart to estimate their position. It had to be Lawn Head, he felt, barely pausing before dashing out on the wing and ducking into Lieutenant Russell Schmidt’s room, which was just behind his own quarters. He gave Schmidt the approximate position of the Pollux and ordered him to get a message out that they were aground. The searchlights were turned on immediately, their powerful beams probing the black, sleety night. The port light was trained on the shore; the large 24-inch light was directed out to sea. “Keep it moving back and forth at a moderate speed toward the horizon, to warn other ships that might be coming along behind us,” Turney ordered. “The Wilkes is aground too, Captain,” Thomas Turner told him. Whatever his thoughts were about the Wilkes, Commander Turney had his hands full with his own ship. It seemed to Grindley that a remarkable change had come over him. The worry of the preceding hours was put behind him; he gathered himself together, became very cool and calm. He was a leader. The port searchlight revealed that they had hit at the base of a steep cliff. A ledge, projecting from the base, showed black and ugly through the seas hurtling upon it. White water rushed up the rock face, and it looked as if the Pollux was trying to climb that cliff as well. She had grounded on a course about 60° from the shoreline. In the crew’s quarters, which had been darkened since “lights out,” the men scrambled to their feet, colliding with each other in the blackness. There were cries of “Torpedo!” and “We’re hit! We’re hit!” Alfred Dupuy, picking himself up, thought: Oh, Lordy! This is no dry run. Henry Strauss thought they had been torpedoed until “collision” sounded; then he figured they had run into one of the destroyer escorts. Over the shouting and confusion, Boatswain’s Mate First Class Garret Lloyd yelled, “Why doesn’t someone turn on the god­damn lights?” The lights came on. Above them, in the starboard passage, the lifeboat crew tumbled in a heap. All were shouting, “We’re hit!” Another crash convinced Lawrence Calemmo that, after many near-misses over the past two days, they had finally collided with the Truxtun. “No, we’ve hit the Truxtun he declared, scrambling to his feet. “Let’s go!” Below, there was a mad dash to get life jackets, foul-weather clothing, and their beloved tailor-made blues, but Warren Greenfield decided to take a look outside first. He rushed up the ladders and looked out through the hatchway to see what was going on. Searchlights revealed white water roaring up a cliff face. Up, up it went, reaching for the black sky, to burst in a cloud of spray before sliding down again. “My God!” he cried, hardly able to believe his eyes. The ear-splitting alarms, coupled with the severe tremors wracking the ship, were summoning the men to their emergency posts. Lieutenant George Bradley’s voice crackled over the loudspeaker: “All hands, man your damage-control stations on the double; this is an emergency. When you have your stations manned, report immediately to the bridge by telephone, or whatever means possible, for further instructions.” There was a rush to the ladders as sailors tried to get topside to their stations. Some were dressed in foul-weather gear; others were not. George Coleman, boatswain’s mate second class, was one of those dressed only in dungaree shirt and pants and ordinary shoes and socks, which he would very soon regret. When the rush subsided, Greenfield hastened below to get into his foul-weather gear, only to discover there was nothing left. His heavy padded coveralls and jacket, heavy woolen helmet, arctic boots, even his gloves, were gone. He dug out what he could find and threw an oilskin raincoat over it all. He came across a flat hat, which was part of their dress uniform, and put it on his head; it would likely take wing at the first good puff of wind, he knew, so he searched for something more practical. He found only a pair of goggles. What the hell, he thought, fitting the goggles over the flat hat and the strap under his chin. A knife without its sheath lay on the deck, and Greenfield picked it up, thrusting it in the pocket of the raincoat before running topside. Somewhere outside the galley he found a life jacket and struggled into it; then, without boots or gloves, he went on deck. Sharing the same compartment in officers’ country, Lieutenant Jack Garnaus and Ensign Alfred Pollack were literally bounced out of their bunks when the Pollux grounded. Pollack, who had been sleeping soundly, yelled, “What’s going on?” “I think we’ve taken a torpedo!” Garnaus yelled back. It was a prospect that gave them little hope of survival in the stormy seas assaulting them. The continual crashing and heaving of the ship told its own story. Both men had slept fully clothed, and they swiftly put on their foul-weather gear. The porthole had been left open while they slept, and almost immediately waves rushed in. Were they foundering? “Let’s get the hell out of here,” Pollack yelled.

Cassie Brown has done an awesome job. Her long and meticulous task of preparation has paid off in a finished work that everybody interested in Newfoundland, in the sea, and indeed in people, should be glad to own.-- Saturday Night --

If anyone wants a story of tragedy and death, of suffering and endurance, of indecision and ruthlessness, this is it.-- Chronicle-Herald --