People of the Sea 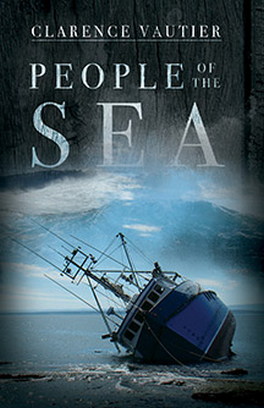 From bestselling author Clarence Vautier comes more stories of unsung heroes: the fishermen who made a living off the sea in Atlantic Canada. These stories are the biographies, family histories, and photograph collections of twenty-two highliners. During the twentieth century, these were the elite fishermen who consistently sailed home with the largest catches taken from the waters off Newfoundland, Labrador, Nova Scotia, Prince Edward Island, and New Brunswick. Of course, with success often comes a price, and many of these brave fishermen lost their lives while engaged in what is still the most dangerous industry in the world. This book is a tribute to the men, women, and families who lived and died for the cold Atlantic waters.

“The Life of Captain Owen Grandy”

Owen Grandy was born on August 31, 1915, the son of a fisherman. Like the rest of the children, he was schooled in Garnish, but unlike many of his peers, he chose to finish high school before joining the fishery.

Although Owen remained in school, he was eager to go to work and learn the skills required to work aboard fishing boats and commercial ships. It was not always easy getting the first berth. Owen’s father, Edward, who was a well-known fisherman, was fishing aboard a schooner named the MV Joan Ella Mae, which was owned by the Hollett firm in Burin, NL. She was under the command of Captain Arch Broydell. Captain Broydell agreed to take Owen Grandy aboard along with his father, so father and son fished together for the next little while.

Although Edward Sr. was fishing out of Newfoundland, he also fished out of Lunenburg. Several times he fished aboard the famous schooner Bluenose with Captain Angus Walters. He often returned to Nova Scotia to fish aboard different banking schooners. Owen Grandy, like his father and many other Newfoundlanders, decided he wanted to try fishing in Lunenburg. In the winter of 1942 he went to Nova Scotia, hoping to find a berth aboard a banking schooner.

Shortly after arriving in Lunenburg, Owen Grandy secured a berth aboard a banking schooner named the MV Marjorie & Dorothy under the command of Captain Mossman. His dorymate was another Newfoundlander, named Matthew Mitchell, who had come to Lunenburg from the Burin Peninsula a few years previously.

Owen Grandy fished the winter aboard the MV Dorothy and Marjorie and in the spring decided to try his luck in the coasting trade aboard schooners and took command of a coasting schooner named the MV B.T.U. on May 28, 1942. The MV B.T.U. measured 72' in length and was built in Parrsboro, Nova Scotia, in 1927, by Kenneth Cochrane and owned by the Hygeia Steamship Company of Little Bras D’Or, Nova Scotia. Her normal routine involved general cargo to ports such as Grindstone, P.Q., Souris, PEI, Argentia, NL, and the French port of Miquelon.

On August 8, 1942, the B.T.U. arrived in Grand Narrows, Cape Breton Island, to load cargo. Captain Grandy had fallen ill and decided to visit the hospital in nearby North Sydney where he was admitted. Several days later he was released and rejoined the B.T.U.

Captain Grandy and his crew continued in the coasting trade and in the fall of 1943, when things started to slow down, he was offered a job as mate on another vessel named the MV CA Roland. The employment was short-term. The CA Roland was hired to go to Garnish, NL, to tow the schooner MV Garnish Queen to Little Bras D’Or. Then in April of 1944, Captain Grandy resumed his command on board the MV B.T.U. for the remainder of year.

The next year, in 1945, when the price of fresh fish was on the rise, Captain Grandy decided to return to the bank fishery and took command of the MV Metamora, a 103-foot, 10-dory banker that was built in the United States as the Rhodora. She was purchased by a firm in Bay Bulls, NL. Most of Captain Grandy’s crew were Newfoundlanders and oftentimes landed his catch in North Sydney or Halifax.

In the winter of 1946, Captain Grandy returned to Newfoundland and took command of the MV Rameaux, an eight-dory banking schooner owned by John Penny & Sons of Ramea, NL. Captain Grandy carried an all-Newfoundland crew from around various ports along the south coast and Fortune Bay. Once all the crew was picked up, Captain Grandy would spend most of the winter fishing on nearby Burgeo Bank, and a little farther to the west on Rose Blanche Bank. Both were popular fishing grounds during the winter months.

On March 29, 1946, the crew awoke and began the task of preparing their dories for another day of fishing. The sky was overcast with light winds. The eight dories were launched and their crews began the task of setting their trawl. Once the trawl was set, the crew returned to the schooner for a short break. Later that day, the fishermen returned to the dories and began retrieving their trawl.

Soon the snow had reduced the visibility and the sun was setting. Hopes of finding the dorymen were slim but Captain Grandy and the crew of the MV Rameaux searched the area. Unfortunately, the dories were nowhere in sight. Captain Grandy set course for Ramea where he arrived the next day to report the loss.

Back on the fishing grounds, the two dories tossed around in the wind and sea, along with blowing snow. What exactly occurred is not certain. One version of the story is that the two dories came upon one another so the four dorymen boarded one dory. The other dory was filled with water and used as a “sea anchor” slowing down the rate other dory in which the four fishermen was drifting, and holding it head-on to the wind. Sometime later that night, a sea broke over the dory and Charles Barnes was washed overboard. The other version was that Charles Barnes washed out of the dory and George W. Barnes came upon Thomas and Azariah later the next day and then boarded their dory.

Fortunately, on Thursday, March 31, 1946, the three dorymen that were aboard the single dory were picked up by the banking schooner the MV Rex Perry en route to Fortune Bay. They were later taken to Ramea.

Captain Grandy commanded the MV Rameaux for the remainder of the year and then returned to Halifax.

People of the Sea is a valuable record of genealogy, biography and accidents at sea.-- Atlantic Books Today --

What stands out about Vautier is that he works in ocean navigation himself, so he’s first-hand familiar with the realities of working on ships. His writing is distinguished by expert insight.-- The Western Star --