Of Boats on the Collar

How It Was In One Newfoundland Fishing Community 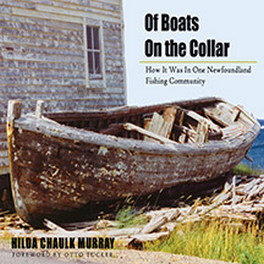 “Of Boats on the Collar . . . will stimulate the memories and stir the emotions of coastal Newfoundlanders and Labradorians everywhere. On the surface the setting is Elliston and the surrounding area. But those of us who remember this province as it used to be will recognize that this book is a microcosm of our province’s whole coastal area and olden times.” – From the Foreword by Otto Tucker Herein lies the story of Elliston, Newfoundland, from its early settlement by planters from Bonavista who came for cod, to the present day, when fishing is no more. It describes where the people lived in each section of the community, where their fishing rooms, homes, and gardens were, the early boats used in Elliston, the methods they used for catching cod, how the fish were handled in the stage and on the flake, the motorboats and their builders, the tools used in boatbuilding, and how boats were built. Honourable Mention in the 2008 Keith Matthews Award for Best Book

In Elliston by the 1920s, upwardly mobile fishermen had acquired traps, necessitating changes in the boats they used for this type of fishing. Because of its function the trap boat or trap skiff was an open boat with its lowest section being amidship. Built first as a sailing boat, it carried one or two sails. The masts were movable, and each was secured by passing it through a semicircular hole in a thwart — the circular hole for the mast was completed by an iron band — and then fitting it into a hole its exact size and shape in the “kelson” on the bottom of the boat. When they were not in use, the sails were furled and laid to one side. Oars and the sculling oar were also standard equipment in a trap boat. However, it was steered by a rudder when under sail. Many trap boats, even when they were fitted with engines, retained their sails, and the oars and sculling oar remained essential equipment. Fishermen were not going to travel miles from shore trusting to a marine engine only. I remember the masts, the oars, and the sculling oar, in my father’s and uncle’s boat in the 1940s and ’50s. We must keep in mind the fact that the type of boat used by a fisherman depended on the scale of his fishing operation. In the same community it was possible to find seine boats, small, open handline punts, trap skiffs, and decked or semi-decked bullies, in the days before the marine “make-and-break” engine was introduced. However, the marine engine did not herald a new-type boat. Often a fishing crew used the boat they already had, and if changes were necessary to accommodate the engine, these were only made in the “after” part of the boat, nowhere else. A motorboat needed a heavier sternpost to accommodate the shaft from the engine, and a square stern had to be altered to a transom stern because of the propellers. Boat-builders are often very conservative because they have to deal with the safety of the men who go in the boats. They are not fools, however, and new ideas have always been considered and worked into their designs. These ideas have come from all directions and at any time. Here and there geographical conditions, scarcity of materials, or simple poverty, have led to the survival of very ancient forms of boats, but these instances have not affected the universal trends of evolution and amalgamation. The boat-builder carried on the tradition of his father or uncle or whoever it may be. Generation after generation the simple design and the manner in which it is to be turned into a boat is carried in their heads. A successful type of hull shape may be handed down in this way for 2000 years or more. It does not follow, however, that something else in that boat form has not altered. Only the very simplest elements in it are more or less static. (T. C. Lethbridge, Boats and Boatmen (London. New York, 1952), 7.)

Of Boats On the Collar is a tremendous achievement.-- The Telegram --

The author\'s tone is relaxed and personable enough to make the reading interesting. . . . Her inclusion of personal anecdotes relating to the area does much to broaden the book\'s appeal beyond an academic audience.-- The Independent --

Highly recommended reading for anyone researching boats and ships of North America.-- The Boatbuilders Tools website --

Murray provides a valuable service by including chapters on various methods of fishing and how fishing boats were built and evolved over time. . . . These chapters, generously illustrated with diagrams and period photographs, are an excellent historical record that will become more valuable as the skills portrayed fade into folklore.-- The Chronicle Herald --

A testimony to Newfoundland\'s rich culture and history...-- The Northern Mariner --

Murray\'s highly detailed, lovingly rendered, and profusely illustrated work is a testimony to the versatility, creativity, and courage of the local craftsmen and fishers who were so deeply engaged with the sea.-- Canadian Nautical Research Society Awards Committee --