The Story of the SS Newfoundland Sealing Disaster 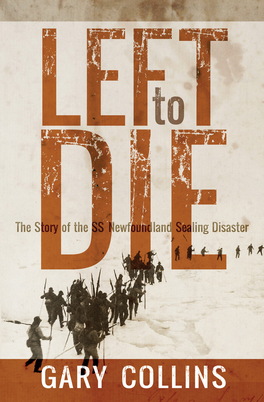 A storytelling masterpiece, Left to Die is Gary Collins’s most ambitious and creative work to date. With new photos and new research revealed, he recalls with stunning clarity what history remembers about the SS Newfoundland sealing disaster of March 1914. “They didn’t die like flies, you know, like I’ve heard some reporters say over the years. Oh no, it wasn’t like that a’tall. The men who died didn’t just drop like flies. There was nothing quick or easy about it. They had frozen feet, and fingers too numb and cramped with the cold to wipe the tears from their eyes.” Cecil Mouland, one of the last living survivors of the SS Newfoundland sealing disaster, told his story to Gary Collins in the fall of 1971 while travelling to St. John’s, where the old ice hunter would live out his final days. This book grew from that encounter and stands alone as the defining tale of the men who were left to die on the ice. The historic convergence of ice, seals, and men in late March 1914 marked the end of Newfoundland’s innocence. Men both young and old left their homes from all over the province that year to pursue the annual seal hunt. Among the vessels that took them to the ice was the Newfoundland, a wooden-walled steamship captained by the famous Captain Westbury Kean. With no wireless aboard the ship, the stage was set for seventy-eight of the men who went over the side and their fates sealed.

John Antle had been walking the waterfront of St. John’s since early that morning. He had spent a sleepless night, half in dread, half in anticipation of the seal hunt. He had had many chances to board the ship the day before—there was no security of any kind—but Antle reasoned that being caught aboard before she sailed would result in his immediate discharge from the vessel back onto the wharf. He decided to wait until the last minute and not risk being discovered until he was at sea. The first light of day found him walking, hands in pockets and head down like a thief, along by the ships being fitted for the voyage. Earlier, he had seen a man around his age go aboard the ship behind a bunch of noisy sealers. Maybe it was another stowaway, he thought. He noted the man had walked slowly to the gangway and then quite suddenly had jumped behind the sealers as if it were a split decision. The others had given no indication that they knew him. For a moment he considered doing the same thing, but he decided he would stick with his plan. He had thought it out for days and decided he would sneak aboard after dark. He had watched another man walk aboard the vessel earlier with a suitcase in his hand and climb the steps to the bridge. None of the sealers carried suitcases. This man was dressed in a greatcoat that came to his ankles, like most of the skippers wore, but it wasn’t Wes Kean. Someone had pointed out Kean to Antle before. The lights of the city came on, but they did nothing to illuminate the docks. John was glad of that. The Newfoundland was in near-total darkness for a while before a few dull lights appeared in her portholes. The lamps looked as though they needed cleaning. The ones aloft in her rigging could have passed for candles. Dozens of shadows stirred on deck, faintly outlined by the ship’s lamps and the men’s glowing pipe bowls and cigarette ends. The voices of the sealers who strolled on her deck came in low tones except when they laughed or coughed. John Antle, still dockside, caught the smell of food coming from the ship as some of the men went below. He waited, his duffle bag by his side. Presently the shapes of a couple of men were on her deck but no one was near the gangway. John figured that, after their supper was over, the sealers would be back on deck smoking and yarning again. Antle lived in the city and he knew that sealers would line the gunnels of the ship as they left port, day or night. He sped like a startled crackie across the narrow apron, the strap of his bag slung over his left shoulder sliding partway down his arm as he ran. He shouldered it again, tighter this time, and raced on. He slowed when he reached the bottom of the gangway and forced himself to run up soft and easy, to make as little noise as possible. Leaping over the gunnels of the Newfoundland, he landed like a bobcat, on the balls of his feet, and headed for his hiding place. He knew where he was going.

Gary Collins has written a powerful, gut-wrenching book that, at least, deserves a place on the same bookshelf as Death On The Ice, if not on a shelf above.-- Southern Gazette --

Gary Collins delivers a powerful reminder that the 1914 sealing disaster shouldn’t be dismissed as an act of God or a freak tragedy. The men on the SS Newfoundland, and their fathers and grandfathers before them, faced treacherous working conditions and risked their lives every year just to get by. Left to Die helps to ensure that their struggle and stories will be remembered.-- Canada’s History --