The Queen of Swansea 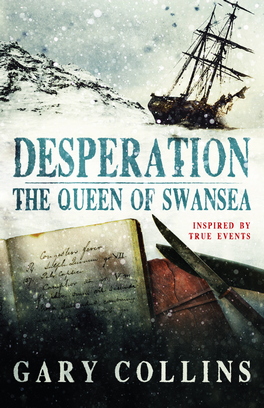 Shipwreck. Starvation. Cannibalism. For the first time, celebrated author Gary Collins brings to life the tale of the brigantine Queen of Swansea. Bound for Newfoundland in December 1867, the vessel made her first port of call in St. John's, only to meet her doom on the rocks of Gull Island, Cape John. The following spring, Captain Mark Rowsell of Leading Tickles chanced upon the fallen ship's crew on his return voyage from the seal hunt. His discovery of the wreckage, and the fate of the men and women on board, marks a chilling and unforgettable event that has echoed worldwide in the history of seagoing vessels. Here, Gary Collins recreates the final voyage of the Queen of Swansea in a story with a gruesome turn of events that makes it unique in the annals of Atlantic shipwrecks. Desperation: The Queen of Swansea is Gary Collins's eleventh book. His book What Colour is the Ocean? won the 2010 Atlantic Book Awards Lillian Shepherd Memorial Award for Excellence in Illustration. Winner, Miramichi Reader The Very Best! Book Awards 2017

Margaret Dowsley read the letter from her husband in her trembling hand again. She couldn’t remember how many times she had read it. It had been in her hand for what seemed like hours. And still her hand shook as it had done the first time she had read it. My darling Margaret, the letter began. But after the first reading, Margaret’s eyes were always drawn down the page to these words: You know I was never very strong or robust, and I am getting weak. I expect that, if providence does not send a vessel along this way today or tomorrow at the farthest, some of us will be no more, and I very much fear I shall be the first victim; if so you will not have the gratification of getting my body, as they will make use of it for food! For food? Felix’s body to be eaten by humans? My God! It couldn’t be! It was preposterous. Unthinkable. Yet the words had been written there, as if in pain, with what appeared to be blood. The page was stained with water and dirt and had long been crumpled, probably by Felix’s own hand in a death grip. The note was not written in Felix’s usual precise penmanship, but she knew it was her husband’s writing nevertheless. There was no doubt of it. Margaret wiped her eyes, still clutching what were obviously her husband’s last words. She stepped to the open window. Sounds of her children at play came through on the warm spring breeze. The parted curtains were bordered with lace and rustling gently with the soft wind. Margaret was still shaken by her husband’s letter. Again and again she read the words, They will make use of it for food. Food? To Margaret it meant just one thing—cannibalism! Her husband’s body had been eaten? Margaret’s stomach roiled. This island wasn’t some far-off South Seas island where naked heathen tribes dancing around a blazing fire practised the vile act of eating human flesh. She had heard of such things. The sailors who sailed foreign seas had their tales to tell when they came home after years in the southern sea roads. Felix, in his capacity as doctor, had talked to many sailors who had ventured around “The Horn” in search of whales. Many of them had come to him with a venereal disease, an unfortunate trophy from an encounter with a dusky-skinned southern beauty. They told tales of life aboard the whaling ships and of black savages who ate the flesh of their fellow men. But this was Newfoundland, a civilized island country of the British Empire. Such a thing was unheard of here. It was immoral. Unthinkable. Unpardonable. Unheard of. Margaret thought of the old saying “paper bleeds little.” But the paper in her hand was dripping with the bitter blood from her husband’s brutal death. Sitting by the window and ignoring the breath of spring wind coming up from the harbour below, the letter bled on: Oh! my darling if I could but once see you and the children I would be satisfied. Margaret stared out the window at her children, ignorant of their father’s horrible death. She had told them, when no word had come of the Queen arriving at Tilt Cove, that the ship had been swept away from the land by a terrible storm and had not been heard of since. Maybe the ship had survived and would return in the spring. It had happened before to other ships. She clung to that hope all winter. Now that hope, faint though it had been, was crushed by this cruel letter, damp with her tears but still clutched in her hand. Unwanted images, horrific and unspeakable, came unbidden to her mind, flooding her senses with what she was reading. Did the letter mean Felix had been murdered and then eaten by his fellow shipmates? Surely God it wasn’t so. Brutal murder, maybe! And then cannibalism? It was a vile deed! She slumped in the chair, her body drained of energy, her mind reeling with emotions. Squeals of laughter still came from her children. Oh the sweet innocence of children at play! How could she place the weight of their father’s death upon their shoulders? With the hem of her apron to her face she sniffed back her sorrow. Tears ran down her soft cheeks. She wiped her eyes, her nose. She trembled, more from learning how Felix had died than from the confirmation of his death. When no news of the Queen making land at Tilt Cove had come in December, she knew in her heart there would be no news of the ship arriving there at all. Concerning ships at sea upon the wintry North Atlantic around the coast of Newfoundland, the old adage “no news is good news” did not apply. She would have to tell her children about their father’s shipwreck but not how he died. She would tell them the Queen had foundered upon a mysterious isle far to the north and their father and the others had all died there.

I loved this book, I could find no fault with it, no low points, no extraneous material and, certainly, no boring passages or ramblings. Mr. Collins is clearly at the top of his storytelling game.-- The Miramichi Reader --

Desperation: The Queen of Swansea is a must read.-- Edwards Book Club --