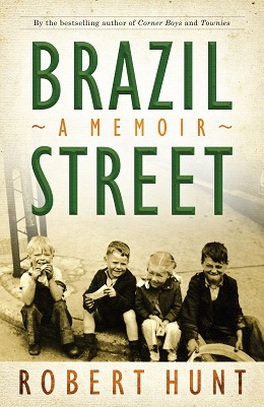 In this final instalment of Robert Hunt’s memoirs, we return to the alleys and street corners of St. John’s in the 1950s and 1960s. Baby boomers coming of age in this growing city often faced difficult and sometimes frightening challenges, including daily threats from bullies and attending school under the oppressive yoke of the Irish Christian Brothers. But life in downtown St. John’s wasn’t all bad. Together with his childhood friends, Robert Hunt explored the city and came to know first-hand some of its historical riches. With stories of World War I hero Tommy Ricketts, hockey greats Alex and George Faulkner, working with Canadian National Railway employees on the “Newfie Bullet,” and many more, Brazil Street is a treasure for the ages. Experience the lives of these townies and corner boys in the heyday of St. John’s, the oldest city in North America, and enjoy this unique trip down memory lane. Praise for Corner Boys “This is one of the best books about growing up—and being a kid—that I have ever read. It moved me even more profoundly than This Boy’s Life by Tobias Wolfe.” — Western Star Praise for Townies “[Robert Hunt’s] writing is a combination of grittiness and tenderness that rings as true as your friendly neighbour who shovels out your driveway after a snowfall and looks a little embarrassed when you thank him.” — Northeast Avalon Times

A vivid picture of a way of life that is gone.-- The Telegram --