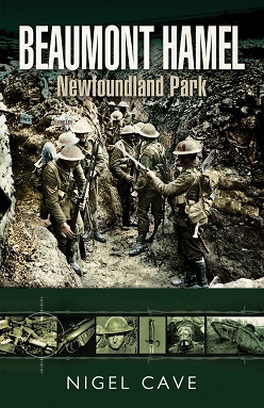 Supported by maps and photographs, this guidebook describes the fighting that took place around Beaumont Hamel, one of many villages along the Western Front of World War I. The Dominion of Newfoundland purchased Newfoundland Park after the war, a decision which led to the creation of the finest trench park on the Western Front. The park was named to commemorate the Royal Newfoundland Regiment’s tragic part in the action of July 1, 1916; the eighty-acre site included most of the ground over which the regiment attacked. Today, Newfoundland Park is a memorial to all the Newfoundlanders and Labradorians who fought in WWI, including those who have no known grave. It is one of only two Canadian Historic Sites outside Canada.

Beaumont Hamel is a small Picardy village, nestling in between chalk uplands and ridges north of the River Ancre. Apart from a rather rowdy time during the mid-sixteenth century French Wars of Religion, the most exciting thing that had probably happened to it was the overnight stay in its vicinity of Henry V and his rather bedraggled army as it made its way towards its glorious fate at Agincourt in 1415. Five hundred years later it featured prominently in the Somme battlefield. Yet the name does not have quite the same instantaneous evocation as perhaps Delville Wood, High Wood and Flers. The reason is that fighting here was limited to a few titanic clashes that lasted a day or two – elsewhere on the Somme, the battles for village and woods went on and on in a seemingly never-ending grinding action. Beaumont Hamel is therefore rather atypical of much of the Somme fighting. Yet it was to this village that I made one of the first stops on arriving in the area for my first time in August 1968, when I was fourteen. The reason? Because one battalion of the forces of the British Empire ad suffered such terrible casualties on July 1st; and because that was the only battalion of the (then) Newfoundland Regiment the decision was made by its government to purchase an eighty acre site which included the bulk of the ground over which it attached. The consequence is that they have left for posterity the finest trench park on the Western Front. When I arrived here on that summer’s evening in 1968 I can remember finding remnants of tin helmets and half rusted away tins of bully beef; there was not another soul (apart from my father) in sight. The hordes come here now; but the park still retains that ability to evoke something of the past, despite the fact that all is peaceful, that sheep graze the trenches, and that the remnants of the soldiers are in the deceptive peace of war cemeteries scattered around the park. Thus the park is the magnet that draws every first time visitor to the Somme. As time went by, and with more and more visits, I extended my interest outside its artificial boundaries and found more – much more – to interest and to admire and to grieve over. Thus the range of the book has been extended to cover the ground from Redan Ridge to the Ancre, and to give at least a cursory look at some of the villages behind the Front Lines which were home to the opposing armies.

There’s no shortage of publications on Beaumont Hamel today, but this book has an acumen of its own.-- The Telegram --

With personal accounts and other Great War facts and events that liberally fill out the book, it was definitely interesting and engrossing reading, and Flanker Press did well in obtaining republishing rights to Mr. Cave’s fine book.-- The Miramichi Reader --

This is a battle of which every Canadian should be aware—and this is the book to learn about it.-- Atlantic Books Today --