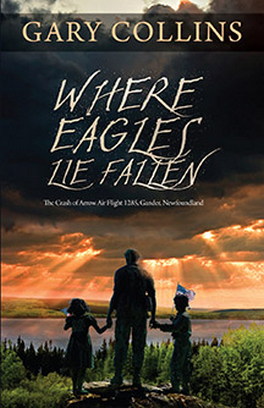 “[Gary Collins is] one of the region’s better storytellers; he has a journalist’s eye for detail, his writing is crisp and lean.” Atlantic Books Today Where Eagles Lie Fallen is celebrated master storyteller Gary Collins’s solemn tribute to the American servicemen and servicewomen who lost their lives aboard Arrow Air Flight 1285 when it crashed in Gander, Newfoundland, on December 12, 1985.This is a story of a tremendous loss of life, of the 101st Airborne Division of the U.S. military – the world-renowned “Screaming Eagles.” Eyewitnesses to the tragedy and the surviving loved ones of the lost American soldiers reveal for the first time the profound effect this event had on them, and how it still affects them today. Within these pages you will meet “Buckeye” Brady, “Keybird” Kee, Michael Shayne “Eliot” Stack, “Ziggy” Ziegler, “Jenny” Word, and Sergeant Christine M. McCleery, American servicemen and servicewomen lost aboard Arrow Air Flight 1285. Among those who assisted Gary Collins in the reconstruction of that fateful day are Robyn Stack, mother of Michael Shayne “Eliot” Stack, Gander Deputy Mayor Sandra Kelly, Air Traffic Controller Glenn Blandford, Mayor Doug Sheppard, and Gander resident Pat Kane.

Some truly breathtaking stories of tragedy . . .-- The Northeast Avalon Times --

A gripping story, which cuts to the true heart of tragedy.-- Downhome --