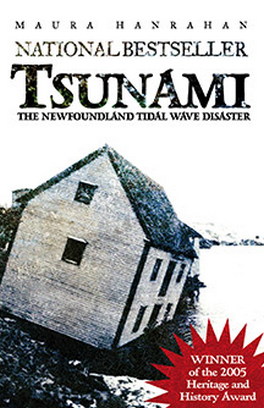 Twenty-seven dead. Staggering property losses. Triggered by an offshore earthquake on the Grand Banks, a tsunami unleashed its fury on the coastline of the Burin Peninsula of Newfoundland, killing twenty-seven people and destroying homes and fishing premises in fifty outports. Here is the dramatic, incredible story of the South Coast Disaster of 1929, the superhuman efforts of Nurse Dorothy Cherry to save the sick and dying, and Magistrate Malcolm Hollett’s tireless campaign to rebuild shattered lives and devastated communities. Winner of the 2005 Heritage and History Award Shortlisted for the 2005 Newfoundland and Labrador Book Awards - Rogers Cable Non-Fiction Award

Using a mix of recreated conversations and historical fact, Hanrahan has crafted an affecting account of a maritime tragedy with a cruel difference.-- Maclean's Magazine --

Author Maura Hanrahan tells this remarkable tale with compassion and power, bringing to us a bit of Atlantic history we may not have known anything about . . .-- The Chronicle Herald --