The Story of the Basilica of St. John the Baptist 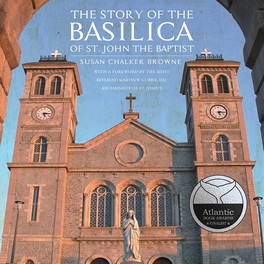 In 1834, Bishop Michael Anthony Fleming stood on the crest of a hill in St. John’s, Newfoundland, and imagined a cathedral on the site. He had no land, no money, and no support, save that of an impoverished Irish congregation. Read the amazing story of how Fleming secured the land he wanted, raised the thousands of pounds required, and even quarried stone from the ground with his own bare hands. The massive project literally cost him his life, but even as the bishop’s strength faded, he was determined to say the first Mass in the cathedral. And he did so, on a frigid January day, in an empty shell of a building, amid scaffolding and sawdust. It was a time when bishops spoke freely on political issues, whenever these infringed on the rights of their flock. It was a time when people marched in the thousands for the laying of the cornerstone in 1841, for the funeral of Bishop Fleming in 1850, and for the consecration of the cathedral on September 9, 1855. It was a time when people gave freely of their time and limited means: fencing the land, digging the foundation and hauling away gravel, and dragging great blocks of granite up from the harbour wharves to the construction site. Today the Basilica-Cathedral is a visual testament to the grit and determination of the people of St. John’s and the bishops who led them. Each magnificent work of art tells its own story. The Dead Christ – 2,000 pounds and carved from a single block of marble. The memorial to Bishop Scallan – was the bishop actually excommunicated? And the old high altar – taken apart in 1955, but the controversy lives on. Take a tour of the Basilica of St. John the Baptist – you will never see it in the same way again. Shortlisted for the 2016 Democracy 250 Atlantic Book Award for Historical Writing

Stand on the steps of the Basilica of St. John the Baptist today and imagine how it used to be; no cars and buses rumbling down Military Road, no airplanes droning overhead, no condominiums sprouting up and detracting from the view. Instead, picture the St. John’s of 1834. There was no Basilica on this ground then. It was empty Crown land which the townspeople called the Barrens. Formerly connected with the artillery stationed at nearby Fort Townshend, the land was no longer needed when the artillery consolidated with the infantry at Fort William, farther east in the town. The Barrens was used as a lot to store wood, and often the soldiers of the garrison could be seen there knocking around a ball in a game of hurling. Now imagine an Irish priest standing on the very top of the Barrens. Before him stretched the whole town, with a stunning view out through the Narrows, to the Atlantic Ocean beyond. In his mind’s eye he saw a magnificent cathedral on this site, towering over the town, and dominating the landscape as vessels entered the harbour. This Irish priest was in fact the bishop responsible for the Roman Catholic people of Newfoundland. In 1834, he had his work cut out for him, but Michael Anthony Fleming was nothing if not a visionary. Driven by ambition, faith, determination, and missionary zeal, he put his flock first and his physical needs a distant second. Always controversial, he butted heads with governors of the day, spoke freely on political issues, and went nose to nose with the establishment of the town. His only concern was the welfare of his Irish Catholic people, the majority of whom were illiterate and mired in poverty. The harsh penal laws that discriminated against Catholics had been repealed in Britain in 1829, but it took some time for the effects of that legislation to filter through to Newfoundland. One example: For every marriage and burial, Catholics of that time were expected to pay a tax to the Church of England, which is how the Church of England helped maintain itself. Previous heads of the Catholic Church in Newfoundland had bowed to this system, preferring to work with the establishment, but Fleming saw the heavy burden this tax imposed on his people and refused to pay, instructing his congregation to do the same. Born in County Waterford, Ireland, in 1792, Fleming arrived in St. John’s in 1823 to help the ailing Bishop Scallan. Scallan was Fleming’s uncle, and he had persuaded the young priest to come to Newfoundland. The reins were passed over to Fleming in 1829, and Scallan died the following year. At that time the only church was the Old Chapel, a dilapidated wooden structure totally inadequate for the size of the congregation. “. . . a rude, ill-shaped wooden building falling to ruin, nearly out of lease . . . and so far from being adequate . . . on every Sunday, several hundred of the people assisting at the Holy Sacrifice exposed to the piercing wind, to the pelting of the bitter snow drift, and kneeling embedded in snow.” – Bishop Fleming Many of the people lived in wooden hovels, crowded with children, with primitive sanitary conditions, ripe for the deadly epidemics that frequently swept through the town. The men worked mainly as fishermen, but were given to drinking and fighting, especially during the long desperate months of winter. They were Fleming’s flock, though, and he fought to improve their lives – through education, guidance from their faith, and pride in themselves as a people. Back in Ireland, he had supported the Catholic Emancipation movement led by lawyer and advocate Daniel O’Connell; Fleming’s fundamental belief was equal rights and opportunity for all. However, when he first requested the grant of Crown land on the Barrens, he was laughed at by the elite and stonewalled by Governor Henry Prescott. At that time, civil governors wielded tremendous influence over the colony’s governance. The entire process of procuring the land took almost five years and required numerous perilous voyages across the North Atlantic to England. In the meantime, Fleming was offered the Commandant’s Field for his cathedral – two acres of land at the top of present-day Long’s Hill. However, this location did not appeal to Bishop Fleming. He knew where he wanted his cathedral to be located and was not to be swayed. Fleming envisioned the cathedral as a rallying point for the Irish Catholics of St. John’s, a project that would pull them together as they worked toward a common cause. Many of the Irish had brought factional disputes with them from Ireland and were often much divided among themselves. Fleming saw the cathedral project as a means of unification as well as a magnificent house of worship for the Catholic population. As the story is told, success finally came in 1838 in the form of young Queen Victoria, who had just ascended to the throne. It was brought to Fleming’s attention that the eighteen-year-old queen took a daily carriage ride though Hyde Park, and if he were to stand at a particular corner in his ecclesiastical robes, she would probably stop and greet him. As the tale continues, this is precisely what happened. Fleming travelled to London and stood at the precise corner; he caught the attention of the queen, who invited him into her carriage and on to Buckingham Palace, where the matter of the land grant was discussed. The subsequent result was the granting of the prized nine acres of the Barrens. This story has been passed down through generations, and there is no historical proof that it is true, including the detail that Queen Victoria gave Bishop Fleming a shawl to protect him against the chill, damp weather, which he apparently gave to the Dempsey family of St. John’s. The tale is, however, part of the lore of the Basilica-Cathedral of St. John the Baptist, and is presented here as such.