The Good and Beautiful Bay

A History of Bonne Bay to Confederation and a Little Beyond 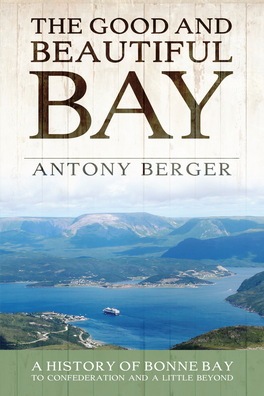 At the heart of Gros Morne National Park is Bonne Bay with its magnificent landscape, sheltered arms and coves, and abundant marine life. Bonne Bay occupies an important place in the history of Newfoundland and Labrador. Long known to Aboriginal peoples, in the mid-1800s it grew rapidly as settlers swarmed in to take advantage of the herring and lobster fishery. Tensions between the competing claims by the French and British were often played out here. In the late 1800s and early 1900s, Bonne Bay grew to become the administrative centre for the northwest coast. Today, it is one of Eastern Canada's most popular tourist destinations, visited by people from all over the world. This book reviews the history of Bonne Bay before Confederation in 1949. It describes the people that came to live here, with glimpses of some of the main characters, the way of life, and the influences of church and school. The book ends with the story of how Gros Morne National Park, a UNESCO World Heritage Site, came to be.

This history follows a medley of themes: the landscape, the naming of places, settlements and settlers, transportation, the fishery, the French, religion, government, social activities, health, logging, tourism, and the Park. Throughout, I include glimpses of the past through the eyes of early travellers and settlers, and through the words of later residents. For the most part, I tackle events in their chronological order, but switch back and forth between topics as they arise, and occasionally jump forward or backward in time. Chapter 2 very briefly summarizes how the landscape in and around Bonne Bay developed and is still being shaped by human and natural forces. Of the first peoples, the aboriginals who moved through and camped in the Bay, we have only faint traces and a very incomplete picture constructed from what they left behind. The story of the first European explorers and later map-makers is much clearer, beginning with the famous James Cook, and continuing to the superb work of British Admiralty surveyors in the late nineteenth century. The naming of places around the Bay helps to set the scene for what follows. The reader is then taken from the early to the mid-1800s, encountering the early settlers, what brought them here, how they lived, for whom they worked, and what the French presence on the West Coast meant to them. We move into the second half of the nineteenth century in Chapter 3. Despite continued discord between the French and local settlers, and the complexities that accompanied the appearance of American fishermen, this was the time of fastest population growth. The fishery, and especially herring and lobster, drove this expansion, but much slower was the development of services like mail, telegraph, roads of a sort, and the first ferries across the Bay. Government officials now made their first appearances here. Chapter 4 continues with the arrival of the first churchmen, who brought with them basic medicine and education. They played such an important part in the development of Bonne Bay’s settlements that it is appropriate to dwell on church history at some length. Many new homes were built and gardens kept. A measure of order was emerging, but there were problems in keeping the law. The chapter ends with a lovely description of South Arm by a French scientist who spent a day here in 1886. The people of the Bay, when they arrived and where they lived in the late 1800s, are described in Chapter 5. We take a brief look at some of the prominent families during the late 1800s and first decades of the twentieth century. One famous American sea captain began his life in dire poverty at the bottom of South Arm: his story is worth telling. The first two decades of the twentieth century are the subject of Chapter 6, which continues many of the earlier themes. Churches and schools were an essential part of each community, and a number of religious and social organizations appeared on the scene. Connecting with the outside world by coastal steamer was essential, but there were many dreams of road and rail. The mail began to move with some regularity, and ferries took people back and forth across the Bay. There were now a few doctors, some trained formally and others self-taught. Bonne Bay men and boys took their part when Newfoundland went to war in Europe, and a few years after the end of the First World War, Woody Point lost by fire much of its business district. Woody Point recovered slowly after the fire but, with the rest of the Island, shortly fell into the Depression. Chapter 7 deals with the hard years of the 1920s and 1930s, and with the lead-up to Confederation. Life was still tough for many, but there were now opportunities for jobs in the woods and in Corner Brook, as its pulp and paper mill developed. Medical services began to improve, especially with the new cottage hospital in Norris Point. The effect of Newfoundland having given up self-government in the early 1930s was felt in the Bay, as elsewhere on the Island. Lomond was now booming as a centre for woods operations and in the late 1940s for a pioneer tourist venture in sports fishing. The churches remained important, but were no longer the only source of community leadership. Bonne Bay men again went to war in Europe, and not long afterwards, Newfoundland joined Canada. The full story of Bonne Bay after Confederation is one for another time. I end this book in Chapter 8 with a miscellany of historical scraps, including brief notes on the road, the ferries, and the medical services. Of interest to readers may be the important contribution singers in Rocky Harbour made to the folk song tradition of Newfoundland and Labrador. The main focus for this final chapter, however, is the story of how the area became a national park and some of the troubles that accompanied its development.

Berger makes this travel through time extremely interesting. In fact, the reader is digesting interesting facts about this beautiful place without even realizing it. The story of Bonne Bay reminds us of how far we have come and how we got to where we are today – including how Gros Morne Park came to be.-- Tint of Ink --