Stories from the Newfoundland Railway 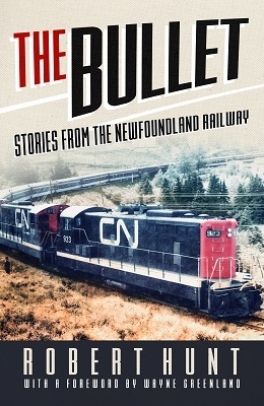 Compiled from interviews with workers now retired from Canadian National Railway, The Bullet is a collection of stories about the men and women who worked for the legendary pre-Confederation Newfoundland Railway, which later became the Canadian National Railway when Newfoundland joined Canada in 1949. The dedication and friendliness of the railwaymen are shown in abundance throughout this book, and it is evident that their service to the people of Newfoundland who “rode the rails” was second to none.

Travel with Robert Hunt on a behind-the-scenes tour as he explores the once proud, never forgotten history of the CN Railway. You will hear the heartwarming tales of families travelling between St. John's and Port aux Basques, funny and sometimes absurd anecdotes about the many colourful people railway employees encountered, and tragedies that have occurred on the rails over the years. And meet Tommy Ricketts, hero of the First World War, who later in life operated a drugstore across the street from the CN terminal on Water Street, and whom Robert befriended while he worked aboard the trains. With a foreword by Wayne Greenland, president of the CN Pensioners Association of Newfoundland and Labrador.

Robert Hunt is a master storyteller of his life experiences growing up in St. John’s, and he continues this tradition with The Bullet. His reflections of the many memorable people he encountered while working as a steward on our 1960s trans-island passenger train will leave an indelible mark as he takes you along the journey with him. From the unknown to some very well-known citizens of our province, Robert shares his insight of his father’s influence on him as he grew into the man he is today. I thoroughly enjoyed the ride, and you will, too!-- Kenneth G. Pieroway --

The Bullet ~ Stories From The Newfoundland Railway by Robert Hunt will transport you back in time with heartwarming stories of hard work, survival, and kindness. This piece of Canadiana is a must read for all Newfoundlanders and lovers of Canadian history.-- Fireside Collections --