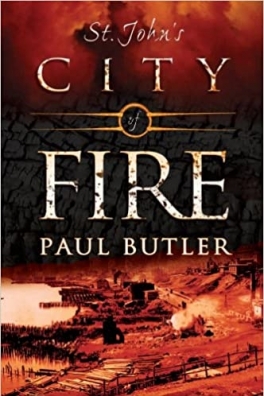 Fire tore through the heart of St. John’s, Newfoundland, three times in the nineteenth century. It left behind utter destitution and an urgent need to rebuild. Survivors were forced to look inward for the strength to start afresh. St. John’s: City of Fire is an historical account of these three fires. It weaves through eyewitness accounts of the conflagrations, depicting the panic and the infighting, as well as the devotion to St. John’s and the determination to see the city rise again.

It has gone down in the lore of the St. John’s fire of 1892 that the catastrophic blaze was started when one of O’Brien’s servants, Patrick Fitzpatrick—also known as “Tommy” Fitzpatrick—was working in his employer’s stable when he stumbled and dropped his pipe in the hay. This one crucial detail was fiercely contested by Fitzpatrick himself. In sworn testimony he later claimed, “I was not smoking. I had no pipe in my mouth that day.” Obviously the reliability of Fitzpatrick’s word is open to question, but it’s curious he should make an assertion that could so easily have been contradicted by the two other employees—Ann Norris and William Ryan—with whom he had been working that day. According to Ann Norris, all three servants were milking O’Brien’s cows late in the afternoon on July 8. At about 4:45 p.m., Fitzpatrick left the other two to milk in “another barn . . . behind the stable.” He was gone for only “seven or eight minutes” before Norris heard “the alarm of fire from Fitzpatrick.” What Fitzpatrick did or didn’t do within those seven or eight minutes aside, the fire by all accounts must have started at a point in time very close to 4:50 p.m. The large quantities of highly flammable hay ensured it grew swiftly. Fitzpatrick himself described seeing the fire in the “southwest corner of the barn, just under the roof.” He had his own explanation of the source: “It was blowing a gale of wind from the westward, and the spark must have come from a house to windward of ours.” Fitzpatrick describes getting the cows and a horse out of the barn, by which time, he says, “the whole place was afire.” It was at this point that the alarm, first signalled by Fitzpatrick, was raised in the neighbourhood. Seeing the smoke, an on-duty police constable, John Courtney, sent a messenger boy running to the Central Fire Hall on Long’s Hill. News of the fire was received at the hall at 5:09 p.m. When the steam engine arrived, in some estimations a good half hour after the initial outbreak, a new drama began to unfold. The fire required to run the steam engine would not burn. The firemen ran into a nearby residence to requisition some kerosene oil for the fire. According to a rigger named Harry Hope, the steam engine “was on the ground an hour or more before it got into working order.” When the problem of firing the steam engine was finally overcome, the firemen hit another snag; there was not enough water in the reservoir tank. One witness did see some water being successfully pumped from the tank but noted that not only was the stream of water feeble, it was also muddy. The tank, he said, “had not been cleaned out since it was first erected; there are four inches of mud in the bottom.” Finally, the steam engine connected to a hose at the top of Long’s Hill and began to work. By this time frantic activity was underway, people in the immediate vicinity removing all furniture that could be saved. Shoemaker John Squires recalled running quickly with another neighbour, John Smith, to save the furniture of a Mrs. Power, one of O’Brien’s nearest neighbours. So quick was the fire, they did not succeed in removing everything. “Mr. Ryan’s house caught next,” remembered Squires. “There was not more than ten minutes between the time I first saw smoke and the burning of Ryan’s house.” Amazingly, considering his house was “only 18 feet to the windward” of O’Brien’s barn, Squires’s home was saved “through wet blankets, wet quilts and the assistance of a lot of friends.” Meanwhile, on Water Street, there was little sign of anything seriously untoward. Waiting with his party in the Central Hotel, from which place a friend was to take them to tea, Henry O’Meara and his party were aware of distant fire bells ringing. O’Meara looked out of the window to see a cloud of smoke rising from a place about half a mile off. Their friend and host arrived at the hotel with his carriage and took them to his “fine residence on the hill,” in the extreme east end of the city. But they were soon distracted from the pleasure of socializing. As “we drove along, our minds began to misgive us, seeing that the wind was blowing fiercely, and the flames striding onward in the direction of the Central.”

It\'s no easy task to make a long ago emergency interesting to a modern reader, but Butler brings his novelists skill to the newspaper reports, eyewitness accounts, and archival information, creating vivid images of the city and her inhabitants.-- Atlantic Books Today --