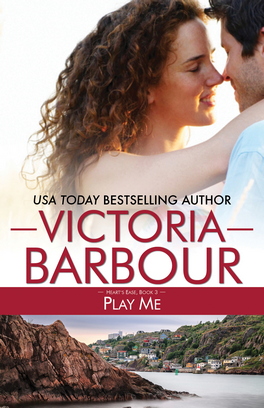 When sparks fly between sultry lawyer Fiona Nolan and sexy folksinger Dillon O’Dea, little do they know that they’re about to turn a long simmering family feud into an all-out scorcher. From the moment she sets eyes on Dillon, Fiona knows that she’s willing to play for keeps, even if it means upsetting her family. And when she takes on a case to defend one of her family’s enemies, will Heart’s Ease ever be the same idyllic escape? Together, Dillon and Fiona fight back against one of the oldest conflicts in Heart’s Ease history, relying on the power of family and music to bring harmony back to the town.

Twenty-nine-year-old Fiona Nolan stood transfixed at the window. She had gotten carried away in her new office. Sure, it may not have been one of the fabled corner offices reserved for the partners of the firm, but the view was still spectacular. She’d spent the past ten minutes watching as a huge cruise ship slowly navigated its way through the Narrows of St. John’s harbour, passing by the boat basin where crab boats were dwarfed by the massive vessel. So much had changed since she’d moved away nearly ten years ago, yet the city still had the character she’d desperately missed while she’d studied in Toronto. Almost hypnotized by the lights shining on the water, she was tempted to let the phone keep ringing, but it wasn’t the best practice for a junior associate to blow off phone calls. She hit the answer button on her earpiece. “Fiona. It’s after eight. You’re gonna miss Asher Corbin! What’s taking so long?” a frantic, high-pitched voice squealed into the phone. Leave it to her sister to make a big deal out of nothing. “Just clewing up. Where are you?” Fiona wracked her brain in vain hope of remembering exactly what she had committed herself to in a delirious state just the night before, when her baby sister, Hannah, had picked her up from the airport. “I’m at The Wailing Banshee—where you’re supposed to be—since six.” “Ooh. Sorry,” Fiona sheepishly replied, as she began tossing folders into her briefcase. Her youngest sister had an innate, special ability to make Fiona feel guilty about the smallest things. “Make it quick. There are some hotties here.” And like that, Hannah had lightened up. And hung up. An Irish pub. Couldn’t get much more Newfoundland homecoming than that. How long was it since she’d allowed herself the freedom to go out and enjoy a night of jigs and reels? It didn’t really fit in with her big city life. But she wasn’t in a big city anymore. She was home. It was fitting that she give herself a new lease on life. One where her past was her own private business. It was time for her rebirth. And it would begin, she decided, at The Wailing Banshee. The popular watering hole was just a little ways down Water Street from the gleaming glass tower that housed Fiona’s law firm, tucked into one of the small streets called coves in the fishing city. As she walked into the pub, the din of chatter and laughter greeted her. One quick look around and it was clear she was overdressed. In a room full of people clad in jeans and casual shirts, her vibrant yellow work suit made her stand out like a canary. Catching Hannah’s eye, she wagged her finger in a come-hither fashion and set off for the bathroom. Once inside, she pulled off the yellow blazer that went with her short pleated skirt and began to peel off her nylons. “Whoa,” Hannah said, walking into the bathroom and catching the blazer her sister threw at her. “What are you doing?” In her haste to dress for work this morning, Fiona hadn’t found a suitable blouse to wear under the blazer and had decided it was high-necked enough to wear with a bra underneath. Now that was a bit of a problem. “Can I borrow your coat?” The long, thrift store, brown leather jacket would just about cover the skirt. “Ah, you forgot about our laid-back style here on the Rock, did ya?” Hannah laughed, handing it to her. “Take it. It’s too big for me anyway.” Fiona glared at her younger, thinner sister. “Thanks.” “But you look great,” Hannah quickly added. “I mean, you must have lost about thirty pounds since you were last home.” Last home was two years ago. Buttoning the coat, Fiona looked more dressed down with her long ginger hair shaken loose, the waves already weaving themselves into curls. The jacket covered almost all the skirt, but it still showed the lace of her bra, and that simply wouldn’t do. “This has to go.” With a flourish, she pulled the strap through the sleeve of the coat before tossing the bra into her briefcase. “Are you mad? You can’t go out like that. You’re practically naked under there.” “I’d sooner sweat it out with the coat done up than be the shining yellow girl flitting about like I’ve lost my cage.” Giving her hair one final toss, Fiona Nolan was ready to re-enter St. John’s society.