Heroes of the Sea

Stories from the Atlantic Blue 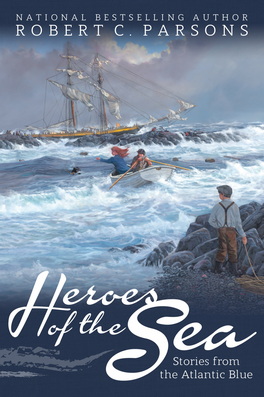 “Hope dies hard with a sailor.” — W. B. Cullen, mate of the Roanoke, 1909 Globe and Mail bestselling author Robert C. Parsons presents more than fifty exciting stories of high-seas adventure! Set mainly along the shores of Newfoundland and Labrador in the 1800s and 1900s, these are true stories of men and women who faced the deadly Atlantic Ocean—and won. Featuring: Ann Harvey of Isle aux Morts, a teenaged girl who helped rescue 160 passengers of the doomed brig Dispatch in 1828 George Lake of Fortune, captain of the schooner George Ewart, who narrowly escaped death when an iron steamer smashed into his vessel off the coast of Spain in 1917 Captain Frank Poole of Belleoram and crew of the schooner Dorothy P. Sarty, who in 1954 were shipwrecked and rowed twenty-five miles to shore in a lifeboat . . . and even refused a lift from a passing coal carrier Captain Arthur Jackman of Renews and crew of the Plover, who in 1890 were at death's door after the sinking of their steamship but were rescued in the nick of time Henry Taylor of Newfoundland, captain of the barque Constance, who in 1884 was awarded by the Italian Admiralty for rescuing three Italian harbour pilots The forty-six men and seventeen women who miraculously escaped the wreck of the steamer Capulet after it went aground at St. Shotts in 1896 . . . and many more!

A great collection of sea stories, Heroes of the Sea is the type of book I can picture gracing a table of a shelf in a sunny porch or a comfy parlour overlooking the restless Atlantic, just awaiting a reader to pick it up and start reading at random.-- Miramichi Reader --