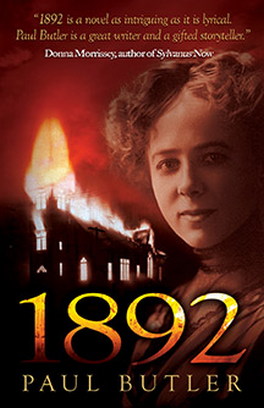 In 1892, critically acclaimed novelist Paul Butler plunges the reader into 19th century St. John’s, its light and its shade . . . An obscure servant, Kathleen, yearns for her home in Ireland. A mysterious scientist, Dr. Glenwood, believes he can be the first to bring a new photographic discovery to the world. A stable hand, Tommy Fitzpatrick, battles inner demons as he tries to win Kathleen’s heart. These collective struggles will soon erupt to change the fate of an entire city. Long listed for the 2009 ReLit Awards

1892 by Paul Butler The low talking ceased and I heard the creaking of a chair, then the approach of footsteps. Father Ryan appeared under the arch, his small eyes tired but piercing under grey bushy brows. I waited for a moment but he said nothing. “Father,” I ventured, “I would like to apologize for this morning.” My throat closed up as I spoke; my voice was thin and unfamiliar to myself. He stared at me, unblinking. “I am . . . I am ashamed,” the words came out so distorted I could barely recognize them. My mouth had become numb and its workings beyond my control. “Why?” he asked without emotion. “What great change has come over you since you passed out in a stinking heap upon the steps of this great symbol of the faith?” Was this some test? There was neither kindness nor pliability in his voice. Nothing of the subtle change in the air could be found in his creased features, nor in the weary sigh that accompanied his words. His breath smelled of stale communion wine, and when I looked into his bleary eyes for some sense of compassion or understanding, all I could see was a piercing dislike. “A maid,” I said. “A maid who lives on Meeting House Hill.” His immovability, like death, had commanded instant truth. I had admitted it was a woman and, for an instant, I expected my zeal to be punctured. But another realization overtook me; my answer had corresponded entirely with a flavour I remembered from my mother’s murmured prayers and icons. This, at last, was the mystery I had never understood: the stream of poetry beneath life’s drabness; Jesus in the clothes of a beggar; the young woman who can alter the world; the virgin on the donkey; the French peasant girl and the grotto. “She suggested I come,” I said with suddenly growing confidence. His expression did not change though I willed it to. There was another deep exhalation and then the words: “What earthly use are you, Fitzpatrick?” The question – incorporating as it did its own answer – had such thundering verity for him, it did not even require a shake of the head. I gazed back at him, helpless. Veins stood out like tiny red maggots in the white of his eyeballs. There was nothing for me here. No fall from a horse for me, no blinding light. I had told him the truth and this was his answer.

1892 combines both lyrical writing and telling detail. It is a novel written by a sure and confident writer in his prime.-- The Chronicle-Herald --

[1892] is a page turner that will be enjoyed as romance, historical fiction and a chilling gothic tale.-- Atlantic Books Today --

The unanswered questions that will nag historians forever (like 'Who started the fire?') are answered amid the drama of a love story caught in tragic circumstances, making for a rich blend of fact and fantasy.-- Downhome --

Butler's account of the fire's genesis is dramatic, but his descriptions of how people find themselves in old St. John's are persuasive and compelling.-- Resource Links --

Butler is adept at using historical events in his compelling story about the developing intimacy of two lower-class young people.-- Newfoundland and Labrador Studies --