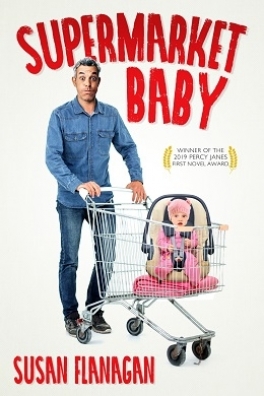 Henry Puddester is a freshly retired civil servant whose life goes off the rails after an innocent trip to the supermarket, where he inadvertently switches his shopping cart with that of a young mother. When he ends up with an infant alongside his four dozen eggs, Henry’s life goes into free fall, and he wishes himself back at work, safe from misplaced babies, aggressive lawyers, and the eccentric nutbar driving a 1983 Ford LTD covered with 4,000 trinkets.

Join this crowd of loons, including Frank, who’s building a time machine in his shed, Akela, the pedantic Cub Scout leader, and Dash, the Spadoodle-screaming Fortnite addict, as Henry attempts to survive two weeks in an unforgiving Newfoundland spring.

“Anyone can accidentally end up stealing a baby at the supermarket. In fact, one day it may happen to you. That’s why you’ll find this novel either terrifying or hilarious!” — Andy Jones, Canadian comedian, actor, writer, and winner 2013 Winterset Award.

Listen, Supermarket Baby is a cartload of fun, eh b’ys?-- Harold Walters, Life on this Planet --

Winner of the 2019 Percy Janes First Novel Award, Supermarket Baby, is quite frankly the comic relief that our Covid world needs! Award winning author Susan Flanagan does a superb job at crafting a storyline of comedic elements that draws the reading audience into the show. Newfoundland readers near and far will recognize many of the plot details like Chase The Ace in the Goulds, headless parking meters in downtown St. John's, and hiking the East Coast Trail to a place called The Spout. Equally intriguing are the quirky characters that Flanagan expertly pens. From Henry's 10 year old, Fortnite addicted son Dash to his cracker jack lawyer wife Millie, each character is portrayed as loveable but slightly flawed. Supermarket Baby is a light-hearted and fun read. Just when you think things couldn't get any worse in the world, they do!!!!!-- Stephanie Collins - Fireside Collections --

"It’s to debut novelist Susan Flanagan’s credit that she can juggle all this and keep it grounded, propelling the story through brisk, individually titled chapters along to adrenalin-fuelled finish. Relationships, even those of the most passing (i.e. Henry and his cellmates), have authenticity, texture, and humour. Here and throughout Flanagan’s tone is sharply observed, witty, and au courant." -- Joan Sullivan - The Telegram --

What kind of person leaves a supermarket with a baby they didn't go in with? And then takes it home so his wife can tell him the best thing to do with it? Yes, an unlikely premise perhaps, but one made surprisingly believable in the experienced hands of Susan Flanagan-- Jean Graham - The Northeast Avalon Times --

Susan Flanagan understands this better than most of us. She has worked as a freelance journalist in St. John’s for more than 30 years, but her first novel, Supermarket Baby, is so crammed with vivid scenes and gags that it has led some admirers to assume she had a background is sketch-comedy performance. Her protagonist, the magnificently named Henry Puddester, sees his life go off the rails in a hilariously and absurdly terrifying way after he accidentally steals a baby from a grocery store. -- James Mullinger - Atlantic Books Today --