The Premiers Peckford, Wells, and Tobin 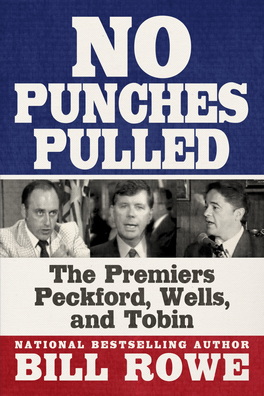 In this eagerly awaited follow-up to his memoir The Premiers Joey and Frank, bestselling author Bill Rowe delivers a spirited account of the next three premiers of Newfoundland and Labrador: Brian Peckford, Clyde Wells, and Brian Tobin. [Minister Brian Peckford’s] ongoing vociferous battle with the Trudeau Liberals in Ottawa over the actual ownership of the offshore petroleum resources added to his lustre. He made precisely zero progress against the federal Liberal government, but Peckford’s three years as the “fighting Newfoundlander” . . . gave him the platform from which to launch his run for the leadership of the PC Party and the premiership.

For a man who disliked talking much in public about his own personal or family matters, [Clyde Wells] surprised a lot of observers by detailing his gut-wrenching and heartbreaking experience when his own son had to leave the province, taking Clyde’s beloved grandson with him, because there was no work here. . . . Thus, his “bring every mother’s son home” speech was extremely effective, as he lumped himself in with listeners and viewers who were also suffering from the forced absence of their loved ones. Wherever he emitted that speech during the campaign, it brought the audience to tears. * * * Most objective commentators . . . conceded that the rally initiative Brian Tobin conceived and orchestrated had a favourable impact that contributed, just three days later, to the narrow “No” vote victory. . . . Even a previous political opponent, the formidable John Crosbie, was in awe of the former Rat Packer’s media savvy. The little rodent had saved Canada. But chief among the Tobin aficionados after the Quebec referendum was Jean Chrétien. My favourite Liberal MP informant in Ottawa told me that, when the close victory was finally known on the night of the referendum, the prime minister was heard screeching, “I love you, Brian Tobin” . . . No Punches Pulled is a memoir. Bill Rowe, as leader of the Liberal Party of Newfoundland and Labrador and, later, host of VOCM Open Line, observed the rise of these three premiers and the shape our province took while under their care. This rousing and often laugh-out-loud political tale, told in Rowe’s inimitable style, will hold readers captive until the very last page. No Punches Pulled: The Premiers Peckford, Wells, and Tobin is Bill Rowe’s tenth book. His books Danny Williams: The War With Ottawa and The Premiers Joey and Frank have appeared on the Globe and Mail bestsellers lists.   Selected for The Hill Times’ List of the Best Books in 2016 (December 19, 2016)

The turnout of voters in the referendum was higher than in any election, provincial or federal, in the history of Canada. 93.52 per cent of registered Quebec voters went to the polling booths. 49.42 per cent voted “Yes” for sovereignty, and 50.58 per cent voted “No.” The sovereignty proposal was just barely rejected. Francophones voted “Yes” to sovereignty by a margin of about sixty per cent. English speakers, and those who spoke neither English nor French as a first language, voted “No” by a majority of ninety-five per cent. Bouchard made a speech in which he accepted this particular result. But he went on to describe his dream of victory in the next referendum. This sent shivers down many an anglophone spine at the thought of another ten or fifteen years of this. “And remember,” some sadistic sovereigntist smirked, “we only have to win once; you guys have to win every time.” One fed-up Newfoundlander “joked” on my [Open Line] show: “I hope to God Quebec does leave Canada—it’ll make the drive to Toronto shorter.” On referendum night, a drunk Premier Parizeau blamed the defeat on “money and ethnics,” demonstrating yet again how close to the surface a racist or tribal prejudice existed in some segments of the separatist movement. The remark caused such outrage, even among his own crowd, that he resigned as premier the next day, although he insisted that he intended to resign anyway in the event of a referendum defeat. The usual fuss and turmoil ensued after the vote, with accusations of wrongdoing from both sides: outside interference and illegal contributions alleged against the federalists, widespread illegal ballot rejections alleged against the separatists. Evidently, it was all true. Tobin himself was reported as acknowledging that Canadian corporations had funded his Montreal love-in project. And a university investigation showed that polling booths with a large number of “No” votes also had elevated percentages of rejected ballots. Tom Mulcair, then a member of the Quebec National Assembly, claimed that there was “an orchestrated attempt to steal the vote” in his district. Charges were contemplated, and in a few cases even laid, against the outside meddlers and interlopers, but ultimately they all came to nothing. Parizeau would disclose later just how close the country came to breakup on referendum day: with a “Yes” result of fifty per cent plus one, his government fully intended to proceed quickly with a unilateral declaration of Quebec independence, knowing full well that any talk of negotiations with Ottawa to remain in Canada was a sham. Jacques Chirac, the president of France, had even been primed to recognize Quebec’s independence, immediately. Most objective commentators I talked to, or heard or read, conceded that the rally initiative Brian Tobin conceived and orchestrated had a favourable impact that contributed, just three days later, to the narrow “No” vote victory. Among the federalists there seemed to be no doubt whatsoever that he’d done it. Even a previous political opponent, the formidable John Crosbie, was in awe of the former Rat Packer’s media savvy. The little rodent had saved Canada. Crosbie one time constructed from his experience the ideal political leader. He or she would possess the iron will of Peter Lougheed, the common touch of Ralph Klein, the ruthlessness of Brian Peckford, the aura of unflappable confidence of Bill Davis, the ability of Clyde Wells to comprehend and articulate complicated issues, and the media savvy of Brian Tobin. It’s interesting that three of the ideal components belonged to Newfoundlanders who had caused him so many years of excruciating torment. But chief among the Tobin aficionados after the Quebec referendum was Jean Chrétien. My favourite Liberal MP informant in Ottawa told me that, when the close victory was finally known on the night of the referendum, the prime minister was heard screeching, “I love you, Brian Tobin,” from the bathroom, where he was changing his soiled underwear.

[A] political page-turner.-- The Telegram --