Don't Have Your Baby in the Dory!

The Story of Nurse Myra Bennett 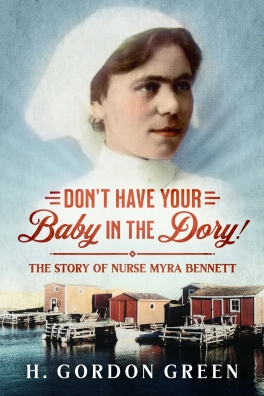 “It’s tempting Providence, it is!” he kept saying. “Sail this here ship on Friday the thirteenth? With all them blinkin’ mines still loose in the sea? It’s only askin’ for trouble, that’s all!” This was the warning given to Nurse Myra Grimsley in 1921 prior to her departure from England to her new assignment in Newfoundland. In May of that year, she arrived in the small fishing hamlet of Daniel’s Harbour, which remained her home for the rest of her life. Here she became the only medical help along 200 miles of storm-swept coast and an invaluable member of this spread-out community. Half a century later, Myra Bennett was still nursing and enjoying the “unexpected” adventures of her profession. Myra Bennett (1890–1990) has received numerous awards and titles of distinction for her work, including a doctorate of science, Member of the Order of the British Empire, and Member of the Order of Canada. Her life story has been documented for print and television and adapted for the stage.

Many things — commentaries on history, Newfoundland society, the meeting of cultures foreign to one another — contribute to the richness of Green’s narrative. To sum up, ‘Don’t Have Your Baby in the Dory’ is a book we are fortunate to have, about a woman whose contribution to our history is indelible.-- Western Star --