The War With Ottawa 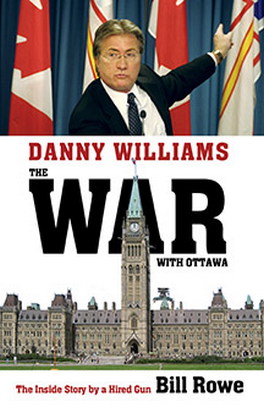 John Efford roared down from Ottawa to St. John’s and issued his famous ultimatum to Danny Williams on Paul Martin’s latest offer on the Accord: “Take it or leave it.” Danny’s comeback? “Let me answer Mr. Efford loud and clear. We will leave it, thank you very much.” And the war with Ottawa rocketed upwards. In 2004, Danny Williams, premier of Newfoundland and Labrador, hired veteran politico and popular radio talk-show host Bill Rowe to represent his province’s interests in Ottawa. This memoir covers the eight months Rowe served with Premier Williams during what became widely known as the Atlantic Accord Crisis and a bitter, long-lasting feud between Williams and the top brass on Parliament Hill. Combining high drama and hard-hitting analysis of the ruthless game of federal politics with hilarious commentary on the very human side of those involved, Danny Williams: The War With Ottawa is the story of a defining time for Williams and his political career . . . and the story of a premier every Canadian came to love or hate. Bill Rowe is a broadcaster, lawyer and former politician in Newfoundland and Labrador. A Rhodes Scholar, he earned a Master of Arts in Law from the University of Oxford. Other books to his credit include Clapp’s Rock, The Temptation of Victor Galanti, and Is That You, Bill? #2 on the Globe and Mail (Canadian Non-Fiction) Bestseller List (October 16, 2010) #4 on the Globe and Mail (Non-fiction) Bestseller List (October 16, 2010) #25 on The Hill Times Top 100 Books Published in 2010 (November 22, 2010) #11 on The Hill Times Editors’ 15 Picks (November 22, 2010) #23 on the Globe and Mail Top 25 (Non-Fiction) Bestsellers of 2010 #4 on the Quill and Quire (Trade Paper Non-Fiction) Bestseller List (January/February 2011) #14 on the Quill and Quire (Canadian Top 20) Bestseller List (January/February 2011) #3 on BookNet Canada’s 15 bestselling titles for each province and territory over the last 10 years – NL List (July 4, 2017)

Interesting book about a successful Canadian politician . . .-- Globe and Mail --

The most interesting political book to be released in Canada in some time . . .-- The Business Post --

I quickly realized that this was not going to be a dry political memoir. To the contrary, not only is the book interesting and revealing of this contentious time, it is very funny in places.-- The Chronicle Herald --

[One of] three of this year's most controversial and talked about political books.-- The House, CBC Radio --

Rowe has a more humanistic side to politics. It is as if a citizen managed to be a fly on the wall while Danny Williams fought.-- Current magazine --

Bill Rowe has a lot to say. There are dozens of interesting stories told, and comments passed on . . .-- The Northeast Avalon Times --

Written with the knowledge and insight that only an insider could possess, this book (sub-titled 'The Inside Story of a Hired Gun') is a timely reminder of the duplicity of far too many of our elected leaders—no matter what their political stripe.-- Atlantic Books Today --

The writer’s good English style — rare today — his knowledge of all kinds of personalities in the political world and his misadventures in getting a basic office set up (which took six of the eight months he was there) all make for amusing and exciting reading.-- PEI Guardian --