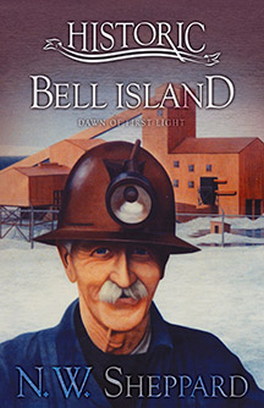 The history of Bell Island, Newfoundland, is an amazing one of a strong and courageous people who overcame the challenge of creating a community exposed to the mighty North Atlantic Ocean. Bell Island: Dawn of First Light covers the first permanent European settlers who were attracted to the rich soil of the island and to the fish in the surrounding waters. It outlines the accidental discovery of iron ore, the growth of the mining operations to become the largest submarine mine in the Commonwealth, labour unrest and the formation of a union, the factors that led to the mine’s closure, and the tragic impact this would have on the residents. This is also the story of the equally determined women who fashioned the family home in both good and bad economic times. The mission of this Historic series is to bring to light the ageless character of Newfoundland and Labrador communities in an effort to preserve the history of this province and to educate future generations about this corner of the global village. Bell Island: Dawn of First Light is the second instalment in this series.

Filled with fascinating stories about the people who lived on Bell Island, an area of rich soil, surrounded by fish-filled waters and home to the largest submarine iron ore mine in the Commonwealth.-- Atlantic Books Today --