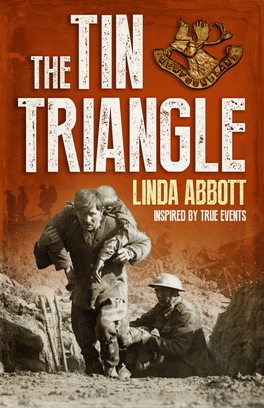 I never imagined I would die this way. Young, surrounded by thousands, yet alone and far away from home. I thought I would be afraid, but I’m not. The pain in my chest has dulled to a mild ache. Maybe if I close my eyes I’ll see my home, see Mom one last time. She’ll be upset if I don’t say goodbye. Dad will understand the sacrifice I made for king and country. And little Joanie. She’ll miss me the most, I think. I open my eyes and my breath comes out as a shudder. Can I still be here among the dead and dying in this barren place? This no man’s land? – Private Ronald Marrie, Beaumont Hamel, July 1, 1916 Ron Marrie of St. John’s enlisted with the Newfoundland Regiment in 1914 to join those who were fighting overseas in war-torn Europe. The Tin Triangle follows him through recruitment, training, and his first deadly clash with the enemy at Gallipoli. But that battle would pale in comparison to the fateful morning of July 1, 1916, when Ron and his comrades went over the top to engage the enemy at Beaumont Hamel. Ron’s story, inspired by the author’s grandfather, is a tribute to the hundreds of Newfoundlanders who paid the ultimate price on foreign shores during World War I. The Tin Triangle is Linda Abbott’s third book and a storytelling masterpiece.

I never imagined I would die this way. Young, surrounded by thousands, yet alone and far away from home. I thought I would be afraid, but I’m not. Only ten minutes ago, I was crouched in our trenches, anxiously smoking Woodbines, waiting for the whistle to signal our launch into attack. The pain in my chest has dulled to a mild ache. The ground is firm beneath my back. Funny, the firmness is comforting, like the rugged ground of my country, Newfoundland. Maybe if I close my eyes I’ll see my home, see Mom one last time. Her sea-green eyes filled with tears as she waved to me from the dock. She’ll be upset if I don’t say goodbye. Dad stood tall as I marched with the other volunteers to fight for the Empire. He’ll understand the sacrifice I made for king and country. And little Joanie. She’ll miss me the most, I think. Her big brother always made time for her. I open my eyes and my breath comes out as a shudder. Can I still be here among the dead and dying in this barren place? This no man’s land? The sun is ribbed like a pumpkin, warming my face, but why is the rest of me so cold? The earth trembles as the big guns drum louder than the roar of a thunderstorm. Bursts of black smoke tarnish the velvet blue of the vast sky. Rocks and earth shoot up, balloon out, then rain down. Shrapnel flies overhead with a zing and cuts into flesh, gnaws at chins, cheeks, foreheads, with the ferocity of starving rats. A man nearby, scarlet blood oozing from gaping holes, grabs at what’s left of his face. How do you eat without a mouth? Screams of anguish and pain tear at my soul. The black clouds are growing, dispersing into black fog. It’s difficult to see through the haze. Something warm and sticky is trickling down the side of my face. If only I could reach my hand up to touch it. My ears pulsate from the cries for help all around me, harder to bear than the steady roar of the big guns. Something hits my shoulder and I try to turn my head to look. There, it’s taken a long time, but I’ve done it. My heart sings! It’s Joey Baker. He’s a buddy of mine from St. John’s, lying on his stomach and staring at me. Oh God! The top of his head is gone. I want to cry for him, yet the tears won’t come. Beyond Joey is the gnarled tree. We Newfoundlanders call it the Danger Tree. Bodies are piled up around it, arms and legs angled out as if double-jointed. I had hoped to make it farther. The screams are closer, more piercing. A blast pounds into the earth and the ground shakes. Dirt flies up and splatters my face. My mouth is filling with clay, but I spit before swallowing too much. I cough with a gurgling sound. The sweet smell of burnt flesh and urine soaks the air, suffocating me. Another explosion, and a leg with a boot attached flies past me. Did I really see that? My stomach lurches, bile rising to my throat. I struggle to keep from vomiting. Men run past me, their battle cries strong, relentless. Some jump over Joey, their chins tucked into their chests like they’re heading into a snow blizzard. One lad, surely no more than fifteen or sixteen, stares down at me. Does he recognize me? My unblinking eyes stare back. He blesses himself. A crow caws close by. A rat’s tail flicks across my face. Dream, my sweet boy, of chocolate bunnies in a land of candy. Okay, Mom. I close my eyes and listen to her soft voice singing me to sleep, the way she did when I was a small child. Her hand gently caresses my cheek. I sigh. The cries and screams are fading into the distance, like echoes in a long tunnel. The ground is still, the heat ebbing from my body. Peace envelopes me, softer, warmer than my grandmother’s quilts. I’m drifting away. All is quiet. Soon I’ll be home in Newfoundland, where sun rays crown thy pine-clad hills.

A fictionalized masterpiece, the main character Ron Marie explores the depths of the battle while offering his personalized perspective.-- Tint of Ink --

This is truly a book worth reading. It gives vivid detail about how much people suffered at Gallipoli and sends a message about how no one really wins at war.-- Edwards Book Club --

Told through the eyes of 17-year-old Ron Marrie of St. John’s, [The Tin Triangle] paints a poignant picture of a young soldier, his fears and triumphs as he fights for king and country.-- Atlantic Books Today --