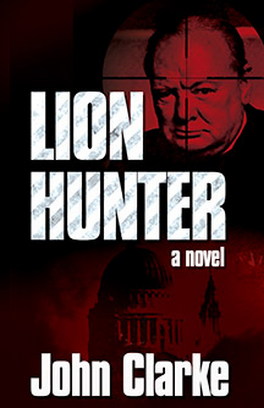 Lion Hunter is a historical novel that opens in Europe in 1941, during World War II, with the introduction of a German secret agent, Hans Farber, following a successful mission in Leningrad, Russia. His superior and head of the Abwehr, Admiral Canaris, charges Hans with a nigh-impossible task: assassinate the prime minister of Britain, Sir Winston Churchill, at the rendezvous point between that political leader and the president of the United States, Franklin D. Roosevelt. The intended outcome of Hans’ mission would be the demoralization of Britain, making it ripe for invasion by the Nazis. The two world leaders were scheduled to meet aboard ship in the waters off Ship Harbour, Newfoundland, to negotiate the Americans’ involvement in the war effort against Adolf Hitler. From Berlin, Germany, the story follows Hans Farber’s journey under cover to England and then on to St. John’s, Newfoundland. Obstacles threaten to compromise his mission at every turn, from Heinrich Himmler and his Schutzstaffel (SS) attempting to sabotage the Abwehr’s operations, and corrupt operatives impeding Hans’ progress for personal gain, to a pair of British secret agents from MI6 hot on his trail while crossing the Atlantic—all leading to a dramatic showdown between the German spy and his pursuers high up on the cliffs of Ship Harbour, Newfoundland, on that historic day when the prime minister of Britain and the president of the United States came together to discuss the fate of both their nations.

The real feeling and passionate interest of the book make it well worth reading.-- PEI Guardian --

The sub-plots move parallel to each other, intersecting at points, and weaving toward a climax that may take your breath away.-- Northeast Avalon Times --

The author’s knowledge of the geography and military operations adds depth to the story. Details and imagery of both Europe and Newfoundland are brought to life in the story.-- Atlantic Provinces Library Association Bulletin --