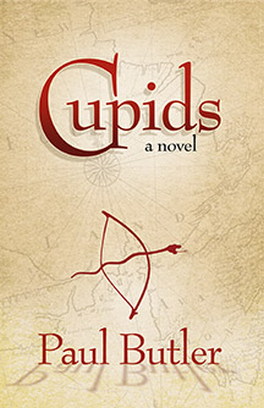 In the fall of 1611, John Guy prepares to return from his colony in Cupers Cove, Newfoundland, to Bristol, England, where he plans to woo Eliza Egret, the daughter of one of the principal stockholders of the colonization venture. Guy must return, however, with a prisoner, a mysterious young man named Bartholomew, who is responsible for burning the colony’s stored grain. As the presence of a convict might cause the backers to question his leadership, Guy chooses a radical course — to use the silken-tongued Bartholomew as an ally. So Guy and his companion enter a tale of intrigue and danger reminiscent of the revenge tragedies of the Jacobean period. Long listed for the 2011 ReLit Awards

A tale of both danger and intrigue . . . and an interesting read to boot.-- The Compass --

Butler does a good job of bringing out that 'unstated drama' in Cupids, the drama unfolding in the first person voices of various characters — most notably John Guy and Bartholomew. Butler provides enough detail to give you a sense of life in the 1600s, but not so much that it weighs down the characters and the story they are telling. Another of his strengths as a writer is an ability to quickly create a picture of a character, one that stays with you.-- Chronicle Herald --

Paul Butler's novel Cupids has brilliant insight to the beginning of what was once known as Cupers Cove and John Guy's adventures.-- Current --

Reminds me of prose that might have been penned by my favourite dead English author, Thomas Hardy.-- Southern Gazette --

Butler provides solid descriptions of both the coast of Newfoundland and Bristol, England; where he excels is in his depictions of the human psyche: the servant who rebels against her station, the aunt who never forgets past wrongs, the willful daughter of a rich man. He has created memorable characters who could all easily be historical figures rather than imaginative figments.-- Historical Novels Review --

Butler’s writing is vivid, fluent, and filled with wonderful period detail, bringing these historical names and legends to life in a series of revealing snapshots.-- Compulsive Overreader Blog --