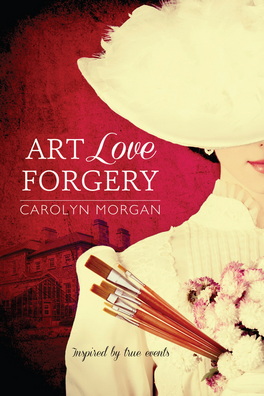 A novel of crime and passion in nineteenth-century Newfoundland Alexander Pindikowsky, a Polish artist working in Heart’s Content, is arrested in 1880 for the crime of forgery. He is sentenced to fifteen months at Her Majesty’s Penitentiary in St. John’s. Governor John Hawley Glover, when made aware of Pindikowsky’s talent, arranges for the prisoner to serve part of his sentence in a most unusual way—designing and painting ceiling frescoes at Government House. Ellen Dormody, a parlour maid at Government House, witnesses first-hand the brilliance of Alexander’s artistry. She is at once captivated by the mysterious painter. Inspired by true events, Art Love Forgery is a story of forbidden love in nineteenth-century St. John’s, a legend that lives on within the walls and ceilings of Government House. Long listed for the Miramichi Reader The Very Best! Book Awards 2017

There are many fascinating characters that exist in archival documents that need to be brought to life. Their stories need to be told. The story of the artist and convicted forger Alexander Pindikowsky is most definitely one of them. Carolyn Morgan takes his story into some of St. John’s finest historic buildings and into an evolving love affair. She gives life to characters from our history.-- Larry Dohey, Manager of Collections and Projects, The Rooms --

A well-written and engaging novel that was inspired by real historical people and events, Art Love Forgery will keep you turning pages.-- Miramichi Reader --

Based on the true story of a Polish artist — who is also a convicted art forger — named Alexander Pindikowsky, debut Canadian author Carolyn Morgan has brought a moment in our country’s history to life.-- Toronto Star --

An engaging and wonderful story. [Carolyn Morgan] brings real people back to life in a well-written perspective of the past.-- Tint of Ink --

More than anything this book proves the axiom ‘write about what you know,’ and Morgan’s knowledge of English literature, visual art, and her native city serves her well in creating a fast-paced, plot-driven read that will please many.-- Newfoundland Quarterly --