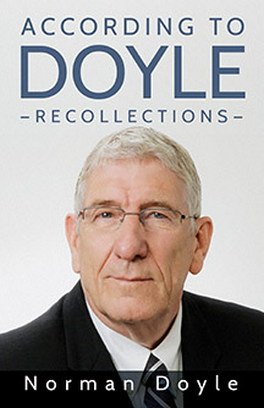 Before he walked onto the political stage, Norman Doyle grew up in Avondale, Conception Bay, in a family of nine children. He followed in his father’s footsteps and made his way to New York City, where he found employment as an ironworker on the site of the World Trade Center. Later, he returned home, where his political aspirations took root. Inspired by the fiery speeches of Brian Peckford, and with the encouragement of the local ironworkers, Norman threw his hat in the ring and was elected to the House of Assembly in 1979. “Norm,” as he is affectionately known in his home province, left provincial politics in 1993 and later joined the House of Commons when he was elected as the Member of Parliament for St. John’s East in 1997. He was appointed to the Senate of Canada in 2012, the latest of many achievements in a long and illustrious political career. During his years on Confederation Hill (St. John’s) and Parliament Hill (Ottawa), Norm worked alongside other political heavyweights in the Progressive Conservative Party, and later the Conservative Party of Canada: Brian Peckford, Gerry Ottenheimer, Bill Marshall, Danny Williams, Loyola Hearn, Peter MacKay, Joe Clark, Jean Charest, and Stephen Harper. In According to Doyle, Senator Norman Doyle gives us a front-row seat to some of the greatest political battles ever fought for province and country—some which pitted Newfoundland and Labrador against Canada and put him in the difficult position of having to serve two masters at the same time. Selected by the Hill Times as one of the Best 100 Books in Politics, Public Policy, and History in 2013

[According to Doyle] is an interesting read and provides an insight into the thinking of one individual who was involved in some if the important political decisions of the past several decades.-- Shoreline News --

His book is well-written, factual and inspiring. His career in politics has been rewarding and certainly has brought great benefits to those he represented throughout his career, in both the federal and provincial jurisdictions. His stories of life in politics are inspiring. -- The Telegram --

Norman Doyle’s fine political autobiography should be read widely, not only in this province, but in Canada generally.-- The Telegram --

The Log of Bob Bartlett
Captain Robert A. Bartlett
$16.95 more