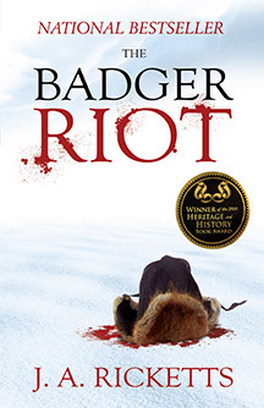 In 1959, the small town of Badger was the centre of a labour confrontation that forever changed the social and political landscape of Newfoundland. For two and a half months, loggers had been striking for better wages and working conditions. Led by the International Woodworkers of America (IWA), the strike reached its climax when national and provincial police forces stormed the town in an attempt to break the impasse. The Badger Riot tells the story of the deadly melee that followed. This work of fiction captures for the first time the horror of a small community of people still reeling in shock from a tragedy that could have been prevented. The number one selling book in Atlantic Canada for 2008. Winner of the 2010 Heritage and History Award. Download a speech given by union organizer H. Landon Ladd in 1983, when he was invited back to Newfoundland to talk about the I.W.A. and the 1959 strike against the A.N.D. Company, operators of the Grand Falls paper mill.

The Badger Riot by J. A Ricketts Vern Crawford was a daredevil and had been all his life. He was willing to try anything. He seemed to have no conscience, no remorse. But for all that, there was one thing about Vern that made people who knew him think that he was a half-decent fellow who was just a little crazy. It was his little daughter, Melanie, born in 1950. She idolized her daddy. Vern doted on her. Whenever Vern came to the door, Melanie would run to him with her arms held out to be lifted up. When she’d learned to speak, she’d cry, “Daddy, Daddy.” Vern always had something to surprise and delight her. Some days he would bring her chocolate or candy, other days he might have a small toy or even a larger gift tucked away in the trunk of his car. It warmed Millie’s heart to see them together because, by the time Melanie was born, she knew that she had married a “devil-may-care” man. In the autumn of 1958, Vern heard about a union that was up in the camps trying to sign up loggers. The A.N.D. Company refused to recognize the IWA, even though their certification with the Newfoundland Department of Labour had given them legal right to bargain and to strike. It was no surprise to Vern or anyone else when the union did call a strike on New Year’s Eve. When he heard talk that the A.N.D. Company was bringing in non-unionized workers to put into the woods camps, Vern hoofed it on over to the manager’s house and knocked on his back door. “Good evening, sir,” he said when the manager answered the door. “Good evening, uh, Vern, isn’t it?” The manager stepped out onto the veranda and looked at the much shorter man standing before him. What he saw was a slight person with thinning, sandy hair, and small sharp eyes that darted around nervously as he worried his cap in his hands. “Yes sir. Vern. I drives taxi, sir.” “Yes. Yes, you do. What can I do for you?” He didn’t ask Vern to come indoors. Not a very friendly guy, Vern thought. He seemed full of himself, puffed-up, like, but that could be in part to the big round belly that protruded over his belt. The manager had a cigarette fitted into an ivory holder and took long draws from it. Jesus, what an uppity fucker, Vern thought. “I was thinking that you might need help transporting men into the camps,” Vern said. He didn’t dare use the word scab. In the A.N.D. Company manager’s mind the men were legitimate workers. “Yes, we do, as a matter of fact.” The manager reached back and closed the door. He only had on his white shirt and the sleeves were rolled up. Vern was shivering with the cold, but the manager didn’t seem to mind the dark January evening. As they spoke, their breaths made white puffs in the air. The manager sucked another long draw through his ivory holder. The A.N.D. Company manager was so tall and large that Vern had to look up at him. “How much will you be paying, sir?” “We’ll give you five dollars a man. More than you get arsin’ around in Windsor with groceries.” Vern knew they were desperate to get the scabs up in the camps. “It’s dangerous work, sir. Very dangerous. I’ll be going through picket lines wherever I go. Fifteen dollars per man.” The manager drew in the smoke again, all the while watching Vern with wary eyes. “Ten dollars,” he said. “Done, sir!” Vern held out his hand to shake with him, but the manager ignored him and went back into the house. Ignorant son-of-a-bitch, Vern thought. Perhaps he was cold, but what odds if his balls froze and dropped off on the steps. Vern was going to get ten dollars a head. Five men in the car was fifty dollars. He jumped aboard his taxi and spun the wheels as he raced up the street. It wasn’t that Vern was against the loggers. He understood their plight. Sure he did. Guaranteed, he thought. Hadn’t he worked as a logger from the time he left school? Hadn’t he suffered the hardships the same as any other logger? But, Vern reasoned, he had a right to make a living too. He had to keep his family fed and clothed, put gas in his taxi, and he needed money for upkeep as well. But there was more to it than that. Vern looked forward to the challenge and the excitement of what might be ahead.

J. A. Ricketts's The Badger Riot is a rare combination for a historical novel: It is gripping and accurate. It is historical fiction done right-- The Globe and Mail --

I found myself transfixed by the story as presented by Ms. Ricketts. Though the characters are fictional they are so well done that you feel you are seeing the events unfold through their eyes. You get an acute sense of the riot which is the true mark of good historical fiction.-- The Pilot --

For readers interested in the story of Badger, the struggle for labour reforms and Newfoundland's move into the modern world, this is an excellent book.-- Atlantic Books Today --

One of my favourite local novels of recent years . . .-- The Northeast Avalon Times --

A truly remarkable novel, which could be accurately described as an epic.-- The Guardian --