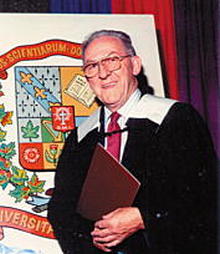 Roderick B. Goff was born in Sydney, Nova Scotia, in 1916, the second son of John J. Goff and Annie (McNeil) Goff. He received his early education from the Sisters of the Congregation of Notre Dame and was an honours high-school graduate from the now defunct St. Patrick’s Academy in Carbonear, Newfoundland. His more than forty years in aviation operations at Gander Airport began in 1940 in the Gander office of the Meteorological Service of Canada. After he entered the employ of Pan American Airway in 1946, he received training at the company’s aviation school at LaGuardia Airport in New York and received his Federal Aeronautics Authority Flight Dispatcher’s licence on November 9, 1946. After fifteen years with Pan Am, he was employed by Eastern Provincial Airlines until his retirement in August 1981.