Will Anyone Search for Danny? 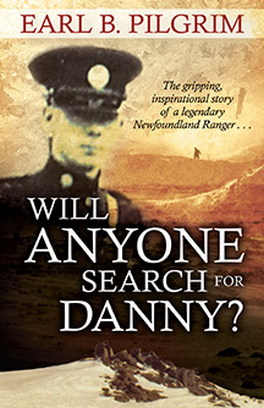 During the winter of 1936, twenty-one-year-old Danny Corcoran of the Newfoundland Ranger Force set out on a routine wildlife patrol from Great Harbour Deep. However, he could never have imagined the nightmare that awaited him. Danny was inexperienced in travelling on the open country of the Great Northern Peninsula, and what was intended to be a two-day trek to find and waylay poachers in the area turned out to be a gruelling two-week journey that would push Ranger Corcoran to the very limits of his endurance. Frightened, crippled, and alone, young Danny Corcoran faced his biggest challenge yet . . . and prayed that a search party would find him in time.

Will Anyone Search for Danny? by Earl B. Pilgrim They reached the big steady, and Pleman called the men over to the area where he had found the rifle and the rest of the discarded items. Each man examined them. “It’s no mistake,” said Peters, “it’s Corcoran’s tracks we’re on. What do you think, Ple?” His tone now contained a little bit of excitement. “What should we do now?” “We’ll have a quick snack and move on,” Pleman said. “It’s two o’clock now. We got about four hours before dark. We will soon catch him. These tracks are pretty fresh, and he’s crawling most of the time. I’d say he got his feet frozen. He can’t cross Ben Hynes’s Brook, that’s for sure, so if he got as far as that, that’s where we’ll find him. We’ll continue the same way, unless, Peters, you want to go on ahead, or come with me.” The Ranger’s eyes widened. “No,” he said quickly. He looked as if he wanted no part of it, as if he was scared of what he was going to see. “I’ll go with you,” said Art. “Who’s going to take your team?” Pleman said. “Maybe Peters.” Pleman grinned. “No thanks,” said the Ranger. “Art, you’d better stick with the dog team. I don’t want anyone with me.” Jack called, “The kettle is boiled, boys. Come on.” They all got their mugs out and continued the conversation as they ate. The tracks leading along the river that Pleman Gillard followed looked like someone had been dragging a bunch of old clothes, or something tied on a rope. If someone else had been out travelling – and not looking for someone lost – they would have passed the trail and thought it to be something foreign, or some kind of an animal that was now extinct. At almost every step, Pleman thought he could see something moving just ahead of him. It was 4:30 p.m. when he came to another wide embankment. He noticed that Danny had actually gone down this one, and it looked like he had lain in one position for some time; the snow had been trampled by his weight. The Ranger from Harbour Deep had gotten to his feet and walked for about fifty to sixty feet and then began crawling again. It was getting cold now, and the snow was starting to freeze, the wind coming from the northwest. “It’s going to freeze,” Pleman said. He could hear the dogs barking. It seemed they were making good time now, so he went on a little farther, and saw where someone had chopped a tree about a year ago. This was the first sign he had seen along the river. “I must be getting close to Ben Hynes’s Brook,” he said. He followed the tracks again, which kept out near the river. All of a sudden his progress was stopped by a slow-moving brook. “Ben Hynes’s Brook. You’ve got to be out on this point.” He saw where Danny had moved around in circles on his feet. Looking around, Pleman saw the roof of the camp on the other side of the brook. “I suppose he wasn’t fool enough to try and get across the brook to that shack,” he said. He could still hear the dogs barking; the boys were coming fast. “My God, there he is,” Pleman cried out suddenly. He moved quickly toward the collapsed form. “Hey! Hey!” Danny didn’t respond, so he walked closer. The unmoving figure was dressed in the dark-brown, almost black parka of the Newfoundland Rangers. Pleman saw what looked like a packsack under the young man’s head. Pleman’s heart pounded in his body and his face felt hot. He had not prepared himself for this. He could see the face in the parka hood. “Hello, Danny Corcoran,” he called, but Danny didn’t stir. Pleman was now about ten feet away. “Now, Ple, get hold of yourself,” he heard himself say. “This job has to be done.” He walked closer and saw the Ranger’s hands. He couldn’t believe his eyes. Kneeling beside him, he lifted the hood back from Danny’s face. What he saw would always be in his memory, as if put there by a red-hot branding iron.

[Will Anyone Search for Danny?] is well-paced, the tension building steadily to a point where you have to keep reading to find out if Corcoran is rescued in time.-- The Chronicle Herald --

Much can be learned about search and rescue operations and management by reviewing case studies. The descriptions of the search activities in Will Anyone Search for Danny? are strikingly familiar even though they occurred more than 60 years ago. I recommend this book be in the library of every search and rescue professional, career or volunteer.-- SAR Scene --