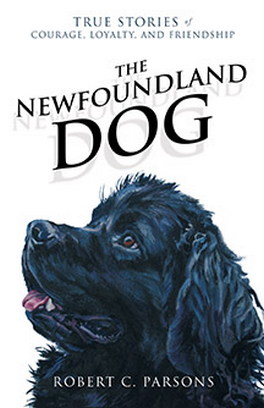 Robert C. Parsons, one of Newfoundland and Labrador’s best-known authors, will delight readers with this brand new collection of more than 50 true stories involving one of nature’s treasures: the noble Newfoundland dog. From the deck of the Titanic, to the sandbars of Sable Island, learn about the breed’s intelligence and charisma as you read tales from around the world of rescue by land and sea, heartwarming stories of undying loyalty, and accounts of the Newfoundland dog risking its own life to save others. Known worldwide as being one of the most courageous, friendly, and protective breeds on earth, the Newfoundland dog has also become one of the most beloved. Dog lovers and story lovers alike will find this book, beautifully illustrated by Mel D’Souza, to be man’s second-best friend!

Pal was as playful and loyal as any Newfoundland. He lived in Gander, Newfoundland, with the family of Rod Hayden. One day he accidentally scratched the face of a child of the family and, reacting as most would, the parents became upset with the incident. Not wanting to have the dog “put down” or put to death, they offered the large dog to the Royal Rifles, at that time stationed near Gander International Airport just at the outbreak of World War II. The Royal Rifles, a regiment of the Canadian Army, accepted the Newfoundland as a mascot for their group, renaming him “Gander” and promoting him to sergeant. In the fall of 1941, when the regiment was assigned to Hong Kong Island, Gander went with them. The Battle of Hong Kong, the defence of this island against the attacks of the Japanese, began on December 8, 1941, a day after the attack on the US naval base at Pearl Harbor. Gander was a real and courageous soldier, seemingly knowledgeable of his duties to protect the soldiers who had taken him in. He helped fight Japanese invaders three times. On two occasions Gander’s stand or attack slowed or stopped enemy soldiers from advancing, thus protecting groups of injured and fallen soldiers. On a third and fatal incident, Gander picked up a Japanese hand grenade thrown by the enemy and rushed with it in his mouth toward the enemy line. In the ensuing explosion Gander died, but the quick removal of the explosive saved the lives of several wounded Canadian soldiers. In time the war ended, and surviving soldiers returned home to Canada, but Gander’s heroism was not forgotten. Yet it took many years for his story to reach public awareness. It came through the awarding of the Dickin Medal, created in 1943 by Maria Dickin. Maria founded the People’s Dispensary for Sick Animals, a veterinary charity established in the United Kingdom. By 1949, many Dickin Medals, likened to an animal’s Victoria Cross, had already been given to dogs, horses, pigeons, and a cat for war bravery. Through the efforts of the Canadian War Museum, Gander was nominated and he was given a posthumous medal on October 27, 2000—the first in nearly 50 years. The citation reads: For saving the lives of Canadian infantrymen during the Battle of Lye Mun on Hong Kong Island in December 1941. On three documented occasions, Gander, the Newfoundland mascot of the Royal Rifles of Canada, engaged the enemy as his regiment joined the Winnipeg Grenadiers, members of Battalion Headquarters “C” Force and other Commonwealth troops in their courageous defense of the island. Twice Gander’s attacks halted the enemy’s advance and protected groups of wounded soldiers. In a final act of bravery, the war dog was killed in action gathering a grenade. Without Gander’s intervention, many more lives would have been lost in the assault. As a final honour, Gander’s name and his medal, at the insistence of survivors of the Battle of Hong Kong, is displayed with the names of those 1975 men and two women on the Hong Kong Veterans Memorial Wall in Ottawa, Canada.

These anecdotes, which are probably true, are addictive and fascinating.-- The Guardian --

Thank you Robert Parsons for taking the time to do the research and share the findings in this charming book.-- Edwards Book Club --

I must also mention the charming illustrations that were done by Mel D’Souza. I found myself pausing on those pages to examine the pictures more closely, they have such delightful detail to them that it may not be noticed at first glance. I encourage readers to pay attention and not just turn the page; those drawings are in perfect harmony with the stories they accompany. I really enjoy Mr. Parsons style of writing. You can tell that this book was deeply researched and that he had a genuine love and interest for the topic. As a reader, that is a much appreciated attribute and I would recommend “The Newfoundland Dog” to anyone, not just dog lovers. I am sad to say that I have never been in the presence of a Newfoundland Dog myself and I do hope to change that some time in the near future … just please don’t tell my cat! -- Goodreads review - Nicole Little --