The Man in the Arena

From Railway Brat to Diplomat 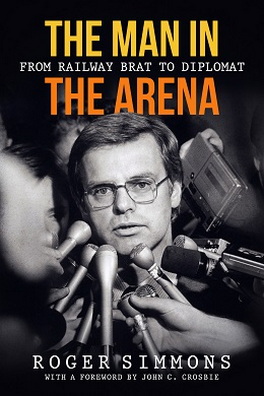 The Honourable Roger Simmons, PC, is a public policy consultant in Canada. Born at sea, on the Atlantic Ocean near Lewisporte, Newfoundland and Labrador, he spent his childhood years in the bustling railway town of Bishop’s Falls. His early career as an educator and clergyman took him to coastal towns in his beloved rural Newfoundland. As a politician, provincially and federally, he was the voice of the island’s south coast for twenty-five years. √  Kicked out of school at fifteen, he clawed his way to the top of the teaching profession

√   The Hail Mary moves of an incurable optimist and risk-taker

√   Humorous anecdotes of life as an educator, clergyman, politician, and diplomat

√   Insider stories of his feuds with Joey Smallwood, his high-profile kneecapping by the taxman, and his passion for the Salvation Army’s redemptive outreach

√   Cameos of interloping in the foreign service

As a diplomat, Roger Simmons headed Canada’s mission in Seattle, and for six years he was a senior policy advisor with Gowlings, one of Canada’s largest law firms. He also spent a year in Baghdad as an advisor to the Iraqi parliament and served as an election observer in Ukraine. “[The Man in the Arena is an] engaging and wonderful account documenting the ups and downs of a successful and colourful Newfoundland politician . . . excellent . . . most entertaining.” — John C. Crosbie

“The book is wonderful and for so many reasons... “As a Newfoundlander who tries to keep connected with a place that has shaped my life, Roger’s book provides rich and intriguing insights into life in Newfoundland during an era all but lost on many. The stories of exploits, foolishness and the courageous happenings leave you waiting for the next chapter. “The author weaves his way through decades of experiencing religion, education and politics as a survivor and for the most part emerges unscathed. While this is not touted as a history book, it is a glimpse of our story, seen through the eyes of a man who has remained a proud Newfie, life long salvationist and friend to the countless. “I love this book because I know the main character as well as numerous individuals who are a part of the script. It’s not a book to be read but it is one to be experienced and to be enjoyed as it recaps a period of dramatic change, the survival, service and contribution of one Newfoundlander and one we all appreciate. “It is a really good story…enjoy!”-- General Brian Peddle, Salvation Army --