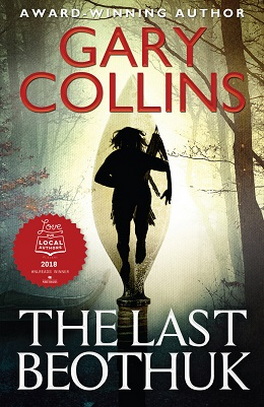 Inspired by True Events Long after Demasduit’s skull has been stolen from her grave, and years after Shanawdithit has died, one Beothuk and his family survive. Bursting out of the pages of Newfoundland history appears Kop, the last true Beothuk. When all the other members of his tribe are exterminated by the Europeans, Kop seeks revenge against the Unwanted Ones. Hidden among the Bear Clan of the Mi’kmaq, the Beothuk strikes back. Follow Kop on his trail of defiance against the European marauders upon his Island. See what becomes of a man who has nothing to lose or live for. Stay with him on a hundred trails and sit with him across the smoke of a hundred campfires. You will not only weep for the last Beothuk—you will cheer him on as he pushes back against the Unwanted Ones.

“The Last Beothuk,” which includes some photos, a bibliography outlining his research, and a select glossary of Beothuk words, is a novel addition to the subject. -- The Telegram --

Gary Collins has given life to the saga of Kop and his family. Their search for others of their dwindling tribe, and the losses Kop faces at the hands of encroaching white settlers, makes a gripping story. Collins has obviously done his research, and I learned a great deal about Beothuk life, culture, and language as I read of Kop’s heartbreaking struggle. The author’s knowledge of his native Newfoundland—the geography, flora, and fauna—provides a rich and detailed backdrop to this moving tale. -- The Historical Novels Review --

The Last Beothuk has come to us, not only from the pages of history but from the brilliant mind of Mr. Collins, as he tells yet another forgotten story of Newfoundland. The record of relations between Europeans and any of Canada’s Indigenous peoples is definitely not a pleasant one, so the reader may be left somewhat disheartened after finishing The Last Beothuk. Nevertheless, we can take eminent satisfaction in the certainty that the now extinct Beothuk’s story has been well-told by one of Canada’s master storytellers. -- Miramichi Reader --