John Guy of Bristol and Newfoundland

His Life, Times and Legacy 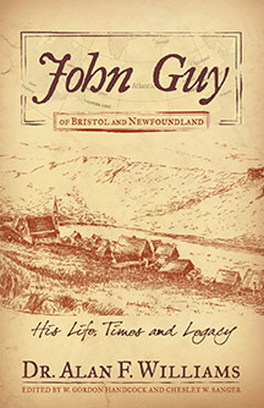 This book relates to the two principal themes of the Cupids 400 Celebrations — the settlement of Cupids in 1610 and the origins of English settlement in Newfoundland and Canada. John Guy was an influential merchant and civic figure in Bristol and West of England history and an important figure in the early history of settlement in Newfoundland through his association with the London and Bristol Company and the colonization of Cupers Cove (Cupids). This book is the biography of one of the province’s and country’s most significant historical figures. It is the most authoritative source on John Guy: merchant, colonizer, Newfoundland governor, Bristol civic official and West of England landowner.

A readable, interesting, yet still scholarly edition.-- The Telegram --

From his early years growing up on the Southwest coast of England to his mid-life merchant success and subsequent adventures while establishing the first colony on The Rock, this tell-all tome captures both the triumphant arc of Guy\'s unique life and the impact that it had upon shaping the new world. The work also succeeds at highlighting the political and economic climate of the day, with Great Britain\'s King James I poised to assert his Imperialist ambitions.-- Atlantic Books Today --

The original author Alan F. Williams, and the two scholars who have revised and added to his work, W. Gordon Handcock and Chesley W. Sanger, have done a painstaking and remarkable job.-- The PEI Guardian --

Alan Williams has produced a remarkably thorough account of Guy\'s career which includes an evaluation of the legacy of his settlement in Newfoundland. Based on impressive scholarship, it is a valuable case study of English commercial and colonial entrepreneurship which is genuinely transatlantic in focus.-- International Journal of Maritime History --