Growing Up Next to The Mental 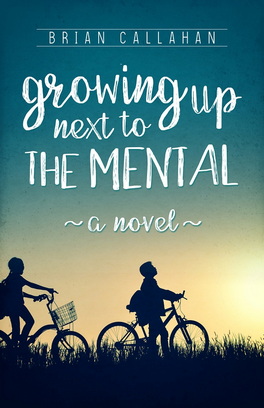 We called it the Mental and thought nothing of it. No more than eeny, meeny, miney, mo and who we were supposed to catch by the toe. Wish Mooney’s earliest memory in life is finding a corpse in the Waterford River. Jarring stuff for a four-year-old, yet far from the most shocking or bizarre he would witness growing up in west end St. John’s next door to the Waterford Hospital. Or, as it was unabashedly labelled before the advent of political correctness: the Mental. An unfortunate moniker, but one legitimately derived from the original name of the place—the Hospital for Mental and Nervous Diseases—when it opened in 1854. Not until 1972 would it be renamed after the river that runs by it. But in Mooney’s world, which revolved mostly in and around the asylum’s drab, depressing confines in the mid-1970s, it was colloquially the Mental, just as its largely despondent inhabitants were the mental patients. Thus was the oft-surreal environment that unavoidably enveloped Wish and the rest of the Irish Catholic Mooney clan, including the quietly acknowledged other realities of the place—the sad, the tragic, the maniacal. Little did Wish ever consider that any or all of that would come full circle later in life when, as the court reporter for the Daily News, he would be thrust into the middle of his own life story, replete with shocking conclusion.

Growing Up Next to the Mental is a book to be read by you and me, by practitioners of the art of medicine, by religious folks, teachers, students, and families. Mental illness is a common and at times, a tragic reality. Brian Callahan makes us meet it head on. -- Dr. Nizar Ladha, Forensic Psychiatrist, Past President - Canadian Psychiatric Association --

The pace is dynamic and the prose often quite funny. Callahan’s writing has lots of energy and punch. The ending clearly anticipates a sequel, which readers will look forward to. -- The Telegram --

This book is brilliant. It’s a Newfoundland based fiction book about a boy who grows up next to the Waterford (a mental health facility in the capital). The young boy at the beginning doesn’t understand the concept of mental illness but as traumatic things happen around him while he’s growing up he slowly grasps the concepts of mental health and reasons why the Waterford is there. It’s a great insight into a child’s mind while discovering the world of mental illness. Definitely a good read. -- Abby - Staff Review - Coles/Chapters/Indigo --