Cut from the Cloth of Fogo

A Life of Teaching, Travel, and Ministry 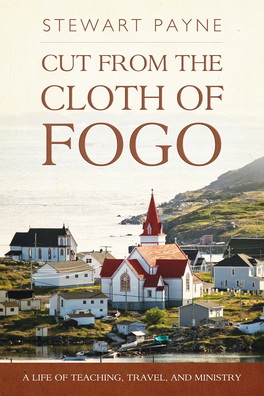 Cut from the Cloth of Fogo is Stewart Payne’s memoir, tracing his humble beginnings on Fogo Island in the 1930s and his journey to becoming one of the most respected Anglican clergymen in Newfoundland and Labrador. With modesty and humour, Stewart describes his early upbringing on Fogo Island, his first trip to the big city to enter Memorial College, his teaching years at Indian Islands and Fogo, and the ministerial calling that put him on the path to a long and rewarding life of humanitarian work. Stewart's first pastoral charge was Happy Valley, followed by Bay Roberts and St. Anthony. He went on to become bishop of the Diocese of Western Newfoundland and retired as metropolitan in the Ecclesiastical Province of Canada. Besides his role in the church, Stewart has also been an activist for social issues affecting his congregation. When the cod moratorium was declared in 1992, he was invited to form a coalition with other churches to help unemployed fishermen and plant workers. In partnership with other concerned fisheries organizations, Stewart helped form a committee to reach out to people in distress, to listen to their concerns, and to bring their issues before government. From his early years in Fogo to his election as metropolitan, Stewart Payne tells his life story as a series of anecdotes involving the people who helped him along the way, including his devoted wife, Selma (née Penney), his equal partner in a lifetime of sharing in other people’s joys and supporting them in times of distress.

'Cut from the Cloth of Fogo' is a pleasant, reassuring read that might renew your sorely tried faith in the clergy.-- The Telegram --

Cut from the Cloth of Fogo, which is published by Flanker Press of St. John’s, is refreshing by its very transparency. Payne recalls his life in a modest and engaging manner, paying tribute to those who helped him on his peripatetic journey.-- Burton K. Janes Blog --

[Cut from the Cloth of Fogo] reads like an adventure story.-- Partners in Prayer, Newsletter of the Anglican Fellowship of Prayer --