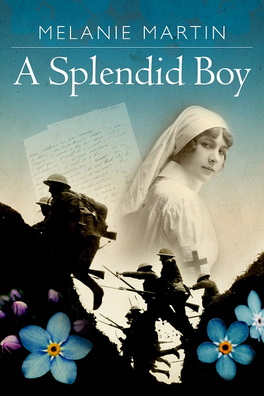 A Royal Newfoundland Regiment Love Story In the summer of 1914, Daniel Beresford’s innocent love affair with the merchant’s daughter is discovered, forcing him to make an impossible decision to save his family from financial ruin. When news of the First World War reaches Middle Tickle, Daniel, who is torn between his love for Emma Tavenor and his responsibility to his family, enlists in the Newfoundland Regiment and departs for training. When Emma learns her father is to blame for Daniel’s unexplained departure, she follows him to England, hoping they'll be reunited. Yet on the voyage, she discovers the regiment has been called up and is already engaged in battle. She realizes her only hope of finding Daniel is to join the Voluntary Aid Detachment and make her way to the Western Front. In 1916, on the eve of the Battle of the Somme, Emma and Daniel are reunited for a single, impassioned night near Beaumont-Hamel. Can the love they share survive the barriers of class and the horrors of battle? Or are their lives fated to join what would later be called a lost generation? Finalist for the 2017 Scéal Book Awards Finalist for the 2017 RONE Awards Runner Up in the Historical: Victorian - 20th Century category of the 2017 RONE Awards

June 1981 St. John’s, Newfoundland Daniel Beresford ran his fingers over the corner of the crisp, white envelope, carefully tracing the outline of the crest. His eyes locked on to the stately caribou, its antlers wide and strong. It stared back from its bright claret bed surrounded by the wheat-coloured laurel wreath in the shape of a crown. Brave. Courageous. Defiant. Maybe he had those qualities once, but not anymore, though he had been proud to wear this symbol and paid a heavy price for it, too. He could guess its contents. “On this thirtieth day of June, on the eve of . . . thank you . . . sacrifice . . . bravery . . . your country . . . never forget . . .” He’d received the same letter for nearly fifty years now. He practically had it memorized, though this one had come much earlier than usual. Daniel turned toward the window, pulling at the sheer material, once white but now yellow and stiff with age. It was a fine day. The sun glistened on the water, making the entrance to St. John’s harbour look like it was covered in diamonds. He chuckled. Diamonds, all right. With the hundreds of tons of shit pumped into the harbour every year, it was far from diamonds down there. But life was deceptive. Daniel pushed the letter into the centre of the table and shuffled his way to the sitting room, slumping into an old green recliner. Why couldn’t they just forget about all that nonsense now? It was a lifetime ago. Hell, it was two lifetimes ago. Through the picture window he watched the neighbourhood kids riding their bikes and teasing each other as they played hopscotch without a care in the world. Job done. Daniel’s eyes wandered back to the table where the letter sat goading him. It was an invitation to the annual Regimental dinner on the thirtieth of June. They invited him every year, even though he’d never attended one. He didn’t want to go to their damn dinner and he didn’t want to hear their glorious version of what they thought had happened over there. Daniel rubbed the deep crater running down the left side of his leg. There was no comfort today. He pulled himself up, his finger catching in the hole in the armrest where it was worn down to the wood. His leather-bottomed slippers scuffed along the faded linoleum. Sometimes those twenty steps to reach the kitchen were like climbing Everest. He sat at the table again. It was just as well to open the bloody thing, because he’d been in a foul mood since it arrived about two months ago. “Oh, shag it.” He picked it up, but it slipped from his feeble grasp. His fingers were once long and slim but were now so gnarled by arthritis it looked like he was permanently poised to hold on to something—a cruel irony, since he had little feeling left in the tips. He examined the uneven scar running along his palm, a rigid white mass of raised tissue that went almost to his wrist. After dropping the letter a third time, he whispered a raspy curse and picked up a butter knife. He sliced the paper clean across and unfolded the letter. March 30, 1981 Dear Mr. Beresford: July 1, 1981, marks the 65th anniversary of the Battle of the Somme, in which so many men lost their lives. To commemorate the fallen, and all those who fought there, the British and Canadian Governments have planned a special joint pilgrimage to the North of France for all who are able to attend. Various day trips include visits to Vimy Ridge and to the communities that are home to Newfoundland’s caribou monuments: Gueudecourt, Monchy-le-Preux, Masnières, and Courtrai. The ceremony of remembrance will be held at Beaumont-Hamel at 4:00 p.m. on July 1, followed by a Veterans of the Great War Reunion Dinner hosted that evening in Amiens. The trip runs from the 27th of June to the 5th of July and includes return airfare, accommodations at Le Prieure Hotel in Amiens, meals, and ground transportation to the various sites. You may bring a family member or personal care attendant. Please contact the Royal Newfoundland Regiment office in Pleasantville by the 30th of May to confirm your attendance. As a veteran of the First World War and one of the last Blue Puttees, I hope you will consider attending this special pilgrimage intended to pay tribute to you and your comrades. Sincerely, Lieutenant Colonel Alan Williams Royal Newfoundland Regiment, First Battalion Daniel blinked and laid down the letter. His eyes darted over the page again, at the community names staring back at him as if they were normal places where people lived and worked. He didn’t remember them that way at all. He’d thought about returning to France once, when he was much younger, and he and Phonse had talked about it a few years ago, but that was just two old men talking about what-ifs. It didn’t mean anything. They weren’t serious about it, and anyway, Phonse was sick now. They’d paid him to go once. Once was enough.

Melanie Martin deftly blends history and fiction in this epic romance set against the panoramic backdrop of Newfoundland society torn by class struggle, the Great War, and the sacrifice of a generation of young men on the battlefields of France, Belgium, and Gallipoli. A real page-turner. You will not be disappointed.-- Frank Gogos, Author of The Royal Newfoundland Regiment in the Great War --

Prepare to be swept back in time. Melanie Martin has a gift for bringing history to life in a story that’s as remarkable as it is sensual. This spellbinding tale is what happens when a historian has a natural talent for storytelling. From the rugged coast of Newfoundland to the tragic fields of France, Daniel and Emma’s journey will leave you breathless.-- Victoria Barbour, USA TODAY Bestselling Author --

This book is exceptional for its depictions of the hardships of war in both Gallipoli and in Northern France for the Battle of the Somme.-- The Miramichi Reader --

This book would make a fantastic movie for many reasons. War. Battle. Romance. Suspense. All great elements of a good story. And the characters are strong—the reader connects to both Emma and Daniel and genuinely wants to see them thrive.-- Edwards Book Club --

The novel is human and involving.-- The Telegram --

A must read for historical lovers!-- InD’tale magazine --