Icebergs of Newfoundland and Labrador 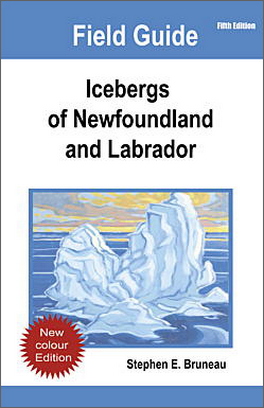 "Icebergs are beyond our control and influence. They are huge, completely clean, spectacular to look at and are rare or absent in all populated places in the world except Newfoundland and Labrador. So why not write about them and get the story out…" - Stephen E. Bruneau Icebergs of Newfoundland and Labrador first appeared in booklet form in 1998, which has been informally reprinted and distributed with improvements each year since. The original intent of the booklet was to provide boat tour operators with correct interpretive information for tourists. The broad interest in the subject and the success of the booklet has led to the production of this first colour version. The project is ongoing as reader feedback and new information is obtained and prepared for improved future editions.
Icebergs of Newfoundland and Labrador by Stephen E. Bruneau Where do icebergs come from? The majority of the icebergs in the North Atlantic come from about 100 iceberg-producing glaciers along the Greenland coast while a few originate in the eastern Canadian Arctic Islands. The glaciers of western Greenland, where 90% of Newfoundland’s icebergs originate, are among the fastest-moving in the world, up to 7 km per year. The icebergs we see off Newfoundland are carried south in the cold Labrador current. How many icebergs are there? Approximately 40,000 medium- to large-sized icebergs calve (break off) annually in Greenland and about 1 to 2% (400-800) of those make it as far south as 48º north latitude (St. John’s). The numbers vary greatly from year to year, and seasonally, as most are seen off Newfoundland in the spring and early summer. How old are icebergs? The icebergs that reach the east coast of Newfoundland probably calved from a glacier more than a year before. They often spend a year or more in cold arctic bays melting slowly (or not at all in winter) until eventually passing through the Davis Strait and into the Labrador current. Rarely do icebergs last more than one year south of this point. The glacial ice that icebergs are made of may be more than 15,000 years old! How do icebergs form? Glaciers form on land as a result of an accumulation of snow over thousands of years. Successive layers compress earlier accumulations until, at depths below 60 to 70 metres, glacial ice is formed. Glaciers “flow” or “creep” outward under their own weight like a viscous fluid. When the edge of a glacier advances into the ocean, the pieces that break off are what we call icebergs. How fast do icebergs move? The average drift speed of icebergs off the northeast coast of Newfoundland is around 0.2 m/s (0.7 kph). Iceberg drift speed is actually influenced by many factors including iceberg size and shape, currents, waves and wind. Speeds greater than 1 m/s (3.6 kph) have been observed, as have stationary non-grounded bergs. Icebergs often take quite eccentric paths so that the distance travelled by a berg may be two or three times the straight-line distance over a week or so. Where do icebergs go? Before some icebergs completely deteriorate, they may travel many thousands of kilometres. Originating at around 75º north latitude in Baffin Bay, an iceberg may travel up to 4000 km south to around 40º north latitude (800 km south of St. John’s). Extremely unusual sightings in Bermuda and Ireland have occurred well outside of this normal limit. Why are icebergs mostly white? Icebergs are mostly white because the ice is full of tiny air bubbles. The bubble surfaces reflect white light, giving the iceberg a white appearance overall. Ice that is bubble-free has a blue tint which is due to the same light phenomenon that tints the sky. What causes the coloured streaks in icebergs? The bluish streaks of clear, bubble-free ice often seen in icebergs result from the refreezing of meltwater, which fills crevasses formed in the glacier as it creeps over land. The ice is blue because of the natural light-scattering characteristics of pure ice. Occasionally airborne dust or dirt eroded from land ends up on the glacier surface, eventually forming a noticeably darkened brown or black layer (in any orientation) within the ice of a floating iceberg. How much of an iceberg is below water? The “tip of the iceberg” expression can be explained as follows: Icebergs float because the density of ice (around 900 kg per cubic metre) is lower than that of seawater (around 1025 kg per cubic metre). The ratio of these densities tells us that 7/8 of the iceberg’s mass must be below water. Usually icebergs protrude underwater so that they are 20 to 30% longer than they appear from above the surface. Also, the average depth (draught) of an iceberg is slightly less than its apparent length above water.

Icebergs of Newfoundland and Labrador tells you, in entertaining and elegant fashion, everything you need to know to enjoy icebergs even more than you already do.-- Newfoundland Quarterly --

This 64-page book is packed with interesting information. It is well-written and easy to read, and an excellent guide for people interested in iceberg watching.-- The Telegram --

This is the best book of its kind I've seen anywhere in years.-- The Northeast Avalon Times --

The attractiveness of this booklet is in the sequential presentation of the information together with the clear and colourful design and layout.-- The Northern Mariner --