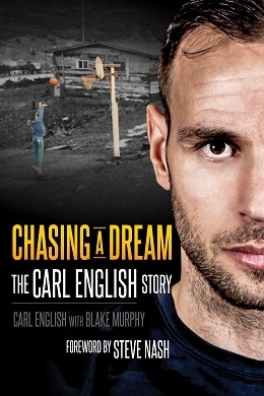 When Carl English was five years old, he was faced with an unimaginable tragedy. The loss of his parents in a fire would change his life as he knew it. But he found an outlet, a comfort zone, a way out of the emotional turmoil he experienced: basketball. He played, hours upon hours, on the side of the highway, in rain, wind, and even snow. As time passed, basketball grew into a passion, and then a dream.

Where would it take him? How big could he dream? And what would he need to make this dream a reality? Hard work, discipline, practice, determination, and most important, self-belief. Basketball has taken Carl all around the world and, in his own words, has blessed him with so much.

Chasing a Dream is the memoir of Newfoundland basketball phenom Carl English. It’s an inspirational true story of persevering through hard work and dedication to make a dream become reality. In Carl’s case, he always dreamed of playing in the National Basketball Association (NBA). Although he went undrafted through all his years playing, he enjoyed the career of a lifetime playing the sport he loves. The basketball pro from small-town Newfoundland travelled overseas and crushed the European basketball circuit. He became a superstar in his own right, by playing in Europe and for the Canadian national team, and returned to his home province to a hero’s welcome.

"Carl English has a story that won’t disappoint. Watching his career, I was always drawn to the spark and confidence I could feel through the TV. A hot streak was always right around the corner, and his bravado was magnetic. Beloved by his national team teammates for his sense of humour and quick tongue, everyone’s got a 'Carl story.’" — From the Foreword by NBA All-Star Steve Nash

"Carl is one of the finest and most accomplished athletes Newfoundland and Labrador has ever produced, but getting to know more about the man is the beauty of this book. Here we examine personal stories and life-changing moments—in Carl’s case, family tragedy—and also see the real mettle of the man inside the jersey. Chasing a Dream is a great read and a brave tale told.” — Paddy Daly, Host of VOCM Open Line

I am not a fast reader. Sometimes it takes me many nights to read a book. But I read this one in a night. You will find yourself routing for Carl, you will be inspired by his journey, and you may even be motivated to follow your own dream. And while it seems obvious that any sports-loving fan will want to read this book (and see all the photos from his life and basketball career), I think non-sports minded readers will find great value in Chasing A Dream too.-- Christa McGrath -Edwards Book Club Review --