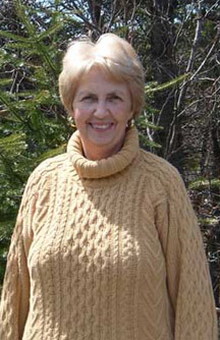 Maxine Ennis has been creating originally designed hooked rugs with her sister-in-law Frances since 2002. Their rugs tell a story about who they are as individuals, where they come from and what they cherish about life and living in Newfoundland and Labrador. These sisters-in-law have enhanced their relationship and their rug hooking skills together and separately by attending workshops, courses and conferences, teaching rug hooking classes and collaborating on rug hooking projects. Several of their rugs have been featured in Rug Hooking magazine, and many are displayed in private and public collections in Canada and Europe. In 2008, Maxine and Frances hooked rugs and provided instruction and guidance to a group of women who produced a series of twenty-five rugs about Beaumont Hamel. These rugs are on permanent display at the Veteran’s Pavilion in St. John’s, Newfoundland and Labrador. This project’s success led to others: “Women’s Lives: Women’s Stories,” exhibited at the Five Island Art Gallery, Tors Cove, Newfoundland and Labrador (March 2009); “Hooking Our Heritage,” exhibited at the Five Island Art Gallery (May 2010) and at the Ros Tapestry Centre, New Ross, Ireland, (September 2010); “Hooking to Our Heart’s Content,” exhibited in Heart’s Content, Newfoundland and Labrador (summer 2011); and “A Whale of a Tale . . . With Hooks, Lines and Singers,” exhibited at the Arts and Culture Centre, St. John’s, Newfoundland and Labrador ( July 2011). Maxine and Frances have participated in a numerous provincial, national and international juried exhibits sponsored by the Craft Council of Newfoundland and Labrador, the Rug Hooking Guild of Newfoundland and Labrador and the Association of Traditional Hooking Artists. They enjoy working together to create the designs and hook all sorts of materials into the chosen backing of burlap, linen or monks cloth. They love to teach and pass on this tradition, an activity that is consistent with their backgrounds— Maxine was a primary school teacher and Frances was an adult educator and community development worker. And they treasure their “dye days” when they can transform those old castaway wool blankets, passed on by friends or found at thrift shops, into bright, mottled or subdued colours. Their tools include old pots and a propane burner by the back door, acid and natural dyes and other ingredients purchased through the mail and some native plants picked during a stroll in the woods on a sunny day. Maxine has two sons and a daughter and their respective partners, two cherished grandchildren, Emma and Cody, and lives with her husband, Bob, in Goulds, Newfoundland and Labrador.