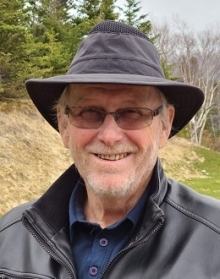 K. Bruce Lane was born and raised in Grand Falls, Newfoundland and Labrador, and has lived in Holyrood since 1982. He holds a B.Sc., B.Ed., and M.Ed. from Memorial University and spent the last thirteen years of his teaching career as a teacher-librarian and computer teacher at Mary Queen of Peace School in St. John’s. During his time at MQP he received the Prime Minister’s Award for Teaching Excellence as well as a Program Development Award from the Learning Resources Council of Newfoundland and Labrador.

Bruce is enjoying his retirement, and when he is not spending time with his grandkids, Sam and Anna, he continues to add to his photographic journey through the beauty of his world and moments caught in time.