Winners will be announced Thursday 27 May 2021.

And, Flanker Press is very excited to announce that

The Woman in the Attic by bestselling author Emily Hepditch,

has been shortlisted for the

This award is sponsored by Writers First and comes with a prize of $500.

About Crime Writers of CanadaCrime Writers of Canada was founded in 1982 as a professional organization designed to raise the profile of Canadian crime writers. Our members include authors, publishers, editors, booksellers, librarians, reviewers, and literary agents as well as many developing authors. Past winners of the Awards have included such major names in Canadian crime writing as Mario Bolduc, Gail Bowen, Stevie Cameron, Howard Engel, Barbara Fradkin, Louise Penny, Peter Robinson and Eric Wright. We would like to thank ECW Press, Rakuten Kobo, Mystery Weekly Magazine, Shaftesbury, Simpson and Wellenreiter LLP (Hamilton), and the Howard Engel family for their sponsorship, and the many participating publishers for their continued support. 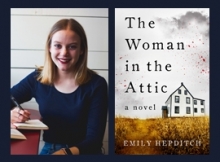