Please join us for the Virtual Book launch of In Search of Adventure - 70 Years of the RCMP in Newfoundland and Labrador on Saturday, August 1st at 2:00 pm Newfoundland Time.

On August 1, 2020, the Royal Canadian Mounted Police will celebrate 70 years of policing in Newfoundland and Labrador with the launch of: In Search of Adventure – 70 Years of the RCMP in Newfoundland and Labrador, written by Helen C. Escott and published by Flanker Press. Award winning author Helen C. Escott has captured the stories from the Veterans behind the police lines. This historical collection will be released on August 1, 2020 to mark the anniversary and will be available in soft cover and ebook at stores throughout the province and online.

These RCMP Veterans had a front row seat to history. From UFO encounters, to moments of sheer terror, to discovering innovative ways to connect with the communities they policed, to investigating the murders of two of their own. As well as personal stories from two constables who were in the middle of the Badger Riot on March 10, 1959 when 24-year old RNC Constable William Moss was fatally injured.

These Veterans built the foundation of the world renowned RCMP and Escott was proud to take on the project, “These police officers lived by The Principles of Law Enforcement. They worked toward our collective success with crime prevention, community trust and engagement, never being above the law, always believing - the police are the public and the public are the police.”

On March 22, 1949, nine RCMP officers arrived in Canada’s newest province and opened a Divisional Headquarters on Kenna's Hill in St. John's. On August 1, 1950, the RCMP was officially recognized with an agreement between RCMP Deputy Commissioner Gray and the Attorney General for the province, the Honourable L. R. Curtis.

Escott, a retired Civilian Member of the RCMP, interviewed each Veteran and documented their stories. Including three of the last living Newfoundland Rangers, the first female police officer to serve in this province and the first Mounties to arrive in 1949 to Canada’s newest province.

In Search of Adventure and Escott’s other novels are available at: Costco, Chapters, and Coles. Also, online at indigo.ca Apple – iTunes, Nook – (Barnes & Noble), Amazon, and Kobo. National and international orders can be placed by calling 1-866-739-4420 ext. #22 or you can send an e-mail to eoldford@flankerpress.com

For media interviews, contact Shawna Butler, Publicity and Marketing Coordinator with Flanker Press, at 1-709-739-4477 ext # 24 or email her at sbutler@flankerpress.com 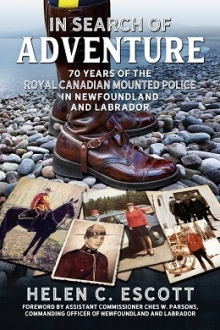